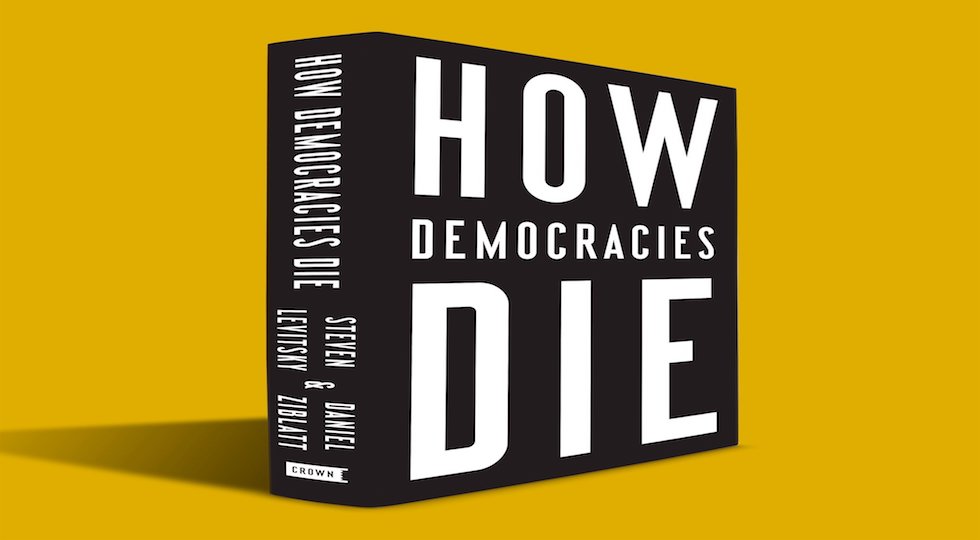 Democracy doesn’t always die with military coups, starts Levitsky and Ziblat, it also dies in the hands of the elected leaders. The subject is not new; after a staggering expansion of democracy after cold war, there were already signs of retreat as chosen leaders around the world-in Russia, Hungary, Poland, Turkey- sought to pave the way for a new wave of authoritarianism. However, the subject sprung out of the academic circles into the mainstream when election of Trump brought about the question “Is American Democracy facing the danger of unraveling?”

Two Political Scientists from Harvard University, Steven Levitsky and Daniel Ziblatt, set out to explain “How Democracies Die”. The authors shy away from quantitative research and jargon ridden language and make ample use of historical examples and analogies crafted to prove overarching theory. Authors propose that the checks and balances within a well-written constitution is not adequate for the survival and longevity of the democracy, as one might be tempted to believe. Rather the answer lies in the unwritten democratic norms that assure the proper functioning of the check and balances. Mutual Toleration, and Institutional Forbearance are presented as the two key unwritten norms that undergirded the American democracy.

The slow decline of the democracy has almost always been at the hands of the demagogues with authoritarian tendencies. Authors reject the idea that constitutional mechanisms or a public that hold democratic values would not be enough to stop such man from reaching to office or to keep them within the democratic playfield. After all, there is no indication that either constitution of Italy or Weimar Republic was designed faulty or their citizens hold different values than others in Europe. Yet such man as Mussolini and Hitler reached to power and dismantled democracy. The book describes gatekeeping and guardrails as the two mechanisms to stop a would-be-authoritarian from dismantling the democracy.

Focusing in US, authors show that gatekeeping for democracy were at the hands of the political parties until recently. Powerful demagogues of the past -Joseph McCarthy, George Harvey, Huey Long, Henry Ford- have all been kept away from the power by the party establishments. According to authors, the party bulwark is no longer effective. Marginal candidates, who used to depend on the party money for campaign funding, are able to find outside money. Also, explosion of alternative media, allowed media establishments outside the mainstream to form. Establishment media allow populist candidates to reach masses while serving as a pressure point for party elites. Authors identify that, only Republican main figures that opposed trump were the ones that didn’t face future elections. It is interesting to note that same dynamics, which gave way to rise in populism, were also existent in Europe. Yet the far-right politicians could not reach to power in states like France or Netherlands. Authors identify the difference but do not delve into the causes of the phenomenon.

If the gatekeeping fails and an authoritarian reaches to power, he would set out to destroy those in his path for total power. Opposing parties, constitutional tribunals, judiciary courts, parliaments, free media, cultural figures and public are all part of the obstacles that protect democracy. Authors refer to examples from countries such as Peru, Turkey, Hungary, Malaysia and Venezuela to show that how authoritarians set out to establish uncontested rule. The seemingly arduous task of razing all opposition is not the modus operandi for modern authoritarians. Rather, elimination of key opposition is usually enough for the rest to stay silent or sideline themselves or simply change sides. Often a national crisis, an invented enemy, or a shady attack is used as a pretext to obtain emergency powers which in turn can be used to crush dissenters. Economic crisis in Peru, Chechen bombings in Russia and a suspiciously clumsy coup attempt in Turkey recently have provided such pretext for increased executive power.

Authors propose that the constitutions that sets up the democratic institutions cannot cover all contingencies and are susceptible to manipulation or misinterpretation. Unwritten norms fill out the gaps in the structure. In US case, authors propose that the mutual toleration and institutional forbearance have been the two key unwritten norms. Mutual toleration refers to the acceptance of opposition as an equal legitimate opponent with the right to exist, compete and govern. Mutual toleration sounds like truism, but it carries a simple and heavy meaning that closes the doors to authoritarianism. Unlike gatekeeping, authors do not show any structural changes in the political machinery that started the decay of mutual toleration. For the onset, they point to 1980s when Newt Gingrich with his hardline rhetoric, exploited discontent in the Republican base to pull the party to his cut-throat, no-compromise ways. New questionable methods caught on both sides of the political alley and accelerated with changes in media and involvement of outside interests. Polarization in the parties were both mirrored and fueled by social changes. Authors briefly refer to “status anxiety”, as the sociological origin of racial and religious polarization

Authors lastly present ideas on saving democracy. One striking assertion is that, those who oppose the authoritarianism should not “fight like them”. The idea is that escalation will play into the hands of demagogues. Instead authors claim that the institutional channels such as protests, prodemocratic coalitions and consensus building should be utilized when available.

“How Democracies Die” prove to be an excellent read both for style and content. Well-crafted arguments support the overarching theory. However, whether the decay in unwritten norms are the cause of decline in democracy or just the symptom of an underlying change is debatable. The question of “why the norms changed?” holds greater weight if one is set out to find the cure. Perhaps one will not need delve deep into the domain of sociology and psychology to find the answer. George Washington might have pointed to both the cause and the cure at the same time when he said “The general government…can never be in danger of degenerating into a monarchy, an oligarchy, an aristocracy, or any despotic or oppressive form; so long as there is any virtue in the body of the people.”