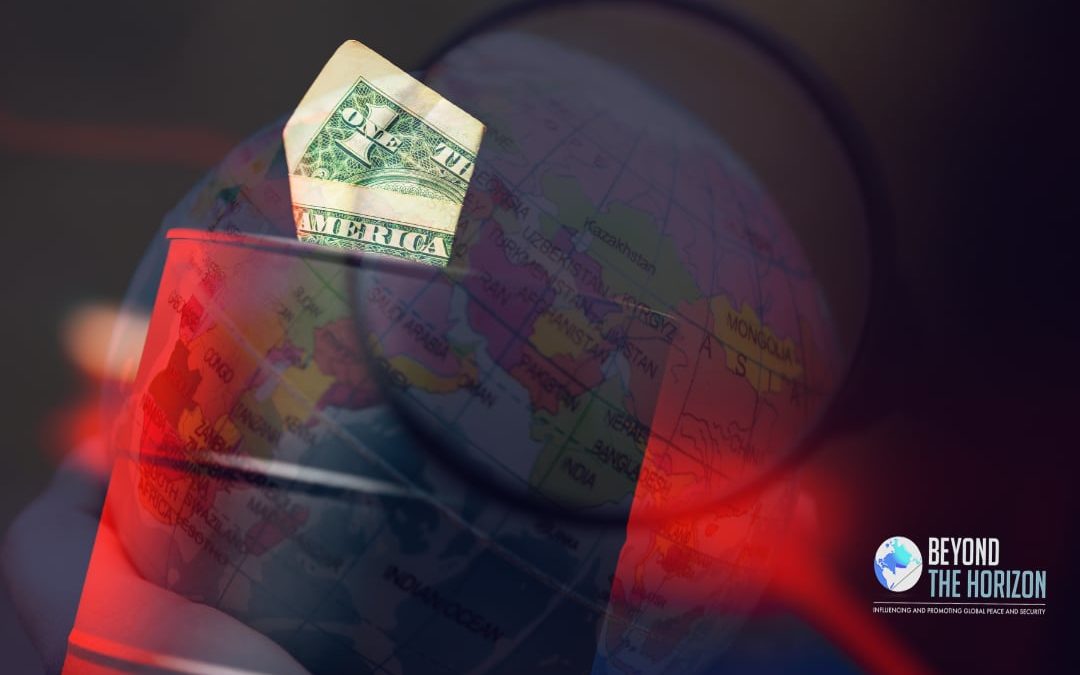 On the 5th of July, a new quarrel surfaced between the supposedly brotherly countries; the United Arab Emirates (UAE) and the Kingdom of Saudi Arabia (KSA). On this day, a OPEC+ meeting that brings together 14 Organization of the Petroleum Exporting Countries (OPEC), Russia, and other 9 non-OPEC countries was cancelled due to disagreement between the two Gulf states on oil production levels.

Due to the pandemic and the lockdown that hit the entire world, oil prices collapsed, and oil production had to be cut down. According to the World Bank, both the UAE and Saudi economies were seriously hit, and shrunk by 6% and 4.1 % respectively. Regardless of both countries’ development levels and innovation efforts to grow in non-oil sectors, especially UAE’s ambition to achieve a non-oil economy, both got shaken terribly from the fluctuation in oil production levels and thus their incomes in petrodollars declined. For especially UAE to continue to prop up its economic diversification plans, it is integral to recover its oil revenues.

What happened on July 5?

OPEC+ Joint Ministerial Monitoring Committee, except for UAE, agreed to a Saudi-backed plan to increase oil output on July 5, 2021. Accordingly, the plan was to increase oil production by 400,000 barrels per day starting from August 2021 until December 2021, a plan that had also UAE’s consent. However, during the meeting on the 5th of July, KSA suggested extending this plan until next April 2022, a modification that UAE opposed.

The country claims that it had sacrificed 18% of its total production capacity and if continued this figure would reach 35%. This was the result of an agreement taken in April 2020 based on the country’s daily production capacity in October 2018.  In that year UAE was only producing 3.1 million barrels per day; however, as the Minister of Energy and Industry in UAE said it is “totally unfair” compared to their level of production capacity these days which surpasses the 3.1 billion baselines one by at least one third.

UAE and KSA Friendship on the Line for a While:

The two Gulf countries have been experiencing tense relations due to opposing positions on a set of issues, especially in the last three years. The OPEC+ incident is just adding to their list of many differences.

To be more precise, the UAE, one of the two major partners of the Coalition to fight Houthis announced on 22 July 2019 that they would draw down troops in Yemen. Yet, this did not mean a complete break-up from the war. It delegated most war-related and political tasks to its Yemeni proxy, the Southern Transitional Council while still staying in the driving seat, often at cross purposes with the order that the Kingdom tries to maintain. Since then, the STC has twice seized the capital Aden and denied the city to the cabinet, causing cabinet members to flee the country, and clashed with forces aligned with the government to leave fewer troops for the latter to fight against Houthis in critical fronts like oil-rich Marib. The UAE has annexed Socotra island to build an intelligence base with Israel and is currently building an airbase on the strategic island of Mayun. Saudi Arabia aims to maintain a unified Yemen led by a legitimate government whereas the UAE tries to create a divided Yemen with a government in the South that will help further its geopolitical aims in the Bab-al Mandab Strait and the Gulf of Aden.

Another element that added to the tense relations was KSA’s reconciliation with Qatar at Al-Ula Summit Agreement. An action which the UAE is less eager to do. MBS hosted the Al-Ula agreements on 5 January 2021, ending three and a half years of blockade between Saudi Arabia and Qatar. Four months later, Riyadh hosted its Turkish counterpart after years of hostility due to its regime that it deems as an extension of the Muslim Brotherhood (MB). MB is considered an archenemy by the UAE and MB in Egypt and its extensions in Europe have been designated a terrorist organization. One reason for its cold relations with the legitimate government in Yemen is its inclusion of the Al-Islah Party, an extension of MB. Saudi Arabia shows a divergent perspective towards the MB issue than the UAE, having a more lenient approach. Supporting the MB was one of the main reasons behind the crisis between Qatar and the other Gulf countries. The UAE had to sign the Al-Ula Agreement to re-establish diplomatic relations with Qatar. However, the misgivings between the two countries have not been addressed yet.  It is not possible to say the UAE has shown the leniency shown by the Saudis towards Qatar and Turkey.

Both countries had initiated their new visions that are supposed to push them away from their dependency on oil and fuel. The UAE acknowledged this need prior to KSA when it initiated “Vision 2021” in 2010. In 2016, it also launched Dubai Industrial Strategy 2030 among other visions and plans. MBZ’s real target has been to achieve complete economic independence from oil for the coming generations of Emiratis. In Saudi Arabia,  after MBS’s appointment as deputy crown prince in 2015, he realized the need for modernizing his country and started playing a game of catching up with its ally with competing initiatives such as the Saudi’s “Vision 2030”. With both of their visions, they became racing against each other in the same development projects, industries, and fields.

The scope of UAE’s modernization is wide. It adopted a Western lifestyle, especially in the city of Dubai, which made it one of the top destinations for tourists and a base for Western companies to enter the Middle East market. It surfaced as a hub for business, tourism, manufacturing, finance, transportation, and innovation. It also tried to project power and become an important political actor. It is no longer a silent observer when it comes to disputes in the Middle East. Under MBZ leadership and, political and financial ties with the Western world, the country was able to fortify its influence in the Arab conflicts such as those in Egypt, Yemen, and Libya, taking a hard stance against Muslim Brotherhood in Egypt and the globe.

Combining all these factors, it is now obvious why the UAE took a strong stance in the OPEC+ meeting, showing that it will no longer agree on working under the shadow of Riyadh. Each country is racing against the other towards a reputation of who is the dominant country in the Gulf. This intra-GCC competition might be beneficial to push both countries to better exploit their potential and achieve better with the resources. But it becomes toxic when they keep on undermining each other. The tense status of affairs between the two major states of GCC has the potential to eventually jeopardize the future of the GCC and OPEC causing a political disturbance and a possible break of stability in the region since the first Gulf War.

Can they Afford a Battle?

On 14 July, Riyadh showed that it is keen to tone down the depth of their split regarding oil production given their long-lasting alliance and revise UAE’s “baseline production.” According to the UAE Energy Ministry, this is a yet-to-be agreed compromise with OPEC+. The deal is to raise UAE’s baseline to 3.65 million barrels per day starting from April 2022 unlike the previous deal, which entitled UAE to the same number of productions until the end of 2022. What it had previously demanded was to raise it from 3.2 to 3.8 million barrels per day, so 3.65 million was the settlement offered. This demonstrated Saudi’s goodwill to avoid a conflict even though if agreed upon it will cost other member countries.

Coming to the question of whether these two Gulf states can afford to lose one another, the answer is definitely “No”. A common interest exists in the geopolitical and security spheres since Iran and the growing influence of Turkey in the region threatens them both. As it has been seen in the previous week, a compromise is to be achieved shortly. However, developments in other spheres and newly introduced import rules and plans show despite the compromise, KSA is preparing to take steps that will put the UAE in a difficult situation within a zero-sum game setting.

What is the KSA’s planning?

Saudi Arabia indeed suggested a compromise to the oil production conflict, but what we have been witnessing lately from Saudi’s new import rules from the Gulf countries presents a new face for Riyadh for the future. “In February, Riyadh announced that from 2024, it would stop doing business with foreign companies whose regional headquarters are outside the kingdom”. The new rules also include goods produced in free zones not to be considered locally made. Goods made by Israel or using Israeli inputs are to be excluded from preferential concessions. Lastly, the GCC tariff agreement will also exclude goods made by companies whose industrial products are made up with less than 40% of the added value after their transportation process and companies made up with less than 25% of local people. With this move, they demonstrated their aim of wanting to move the regional economic hub to Riyadh from Dubai.

In its race to catch up with Dubai, in October 2017, KSA had announced its plans for the megacity Neom, which is an acronym for “New Future”. What makes this project distinctive is its role as a soft power tool. This project attracted the Russian investment fund, which announced that billions of dollars will be invested, as well as attaining the approval of the British Prime Minister Boris Johnson during the G20 summit. However, for the Neom project to prosper, an agreement must be made with Israel in the future. The need for this agreement is due to the 1979 peace treaty between Israel and Egypt, which granted Israel free shipping through Tiran Straits. In 2017, Egypt handed over the Tiran and Sanafir Islands to Saudi Arabia on the notion that it would benefit from the project since the KSA will plan on building a bridge to connect Egypt and Neom, crossing over the Strait of Tiran. Its second significant project is the “King Abdullah Center for Atomic and Renewable Energy” (K.A.CARE), which was founded in 2010. Besides achieving future sustainable energy nationally and internationally, the K.A.CARE has to collaborate with several local and foreign agencies and states to collect the required expertise and ensure the execution of its fundamental objectives.

Projects like these are what is helping the KSA to build alliances and networks based on investment opportunities. Communicating on an intercontinental level through projects is one of the fundamental elements of soft power diplomacy. Advertising the country through projects and collecting transnational support is a vital aspect and this is what MBS has been doing to outshine Dubai.

The UAE-Saudi conflict was never solely a conflict of disagreement around oil production. These two countries have been competing on a slew of issues since 2016 to include the Yemen war, reconciliation with Qatar, initiation talks with Turkey, and stance towards Muslim Brotherhood. The OPEC+ dispute was just a cherry on top. Riyadh has been introducing initiatives to seize primacy in the Gulf area by outbidding what the UAE offers and trying to deny the lenient conditions it has so far shown to the UAE. International efforts underway to solve differences among the two countries will certainly help weather the issue of oil production levels within the context of OPEC+. But it will take more compromise on years-long investment and sacrifice for both sides to reach an overall agreement, which is harder to see coming. Despite a visit by MBZ to Saudi Arabia this week, pro-government analysts continue to publicly criticize the UAE. This has the potential to disrupt stability in the already turbulent region. To avoid this eventuality, there is a need for more conversation and coordination between the two countries based on the rationale that they cannot afford to become enemies and turning against each other.

Christel Haidar is currently following Master’s Program in Public and Culture Diplomacy at the University of Siena (Italy) and is currently a research assistant intern at Beyond the Horizon ISSG.