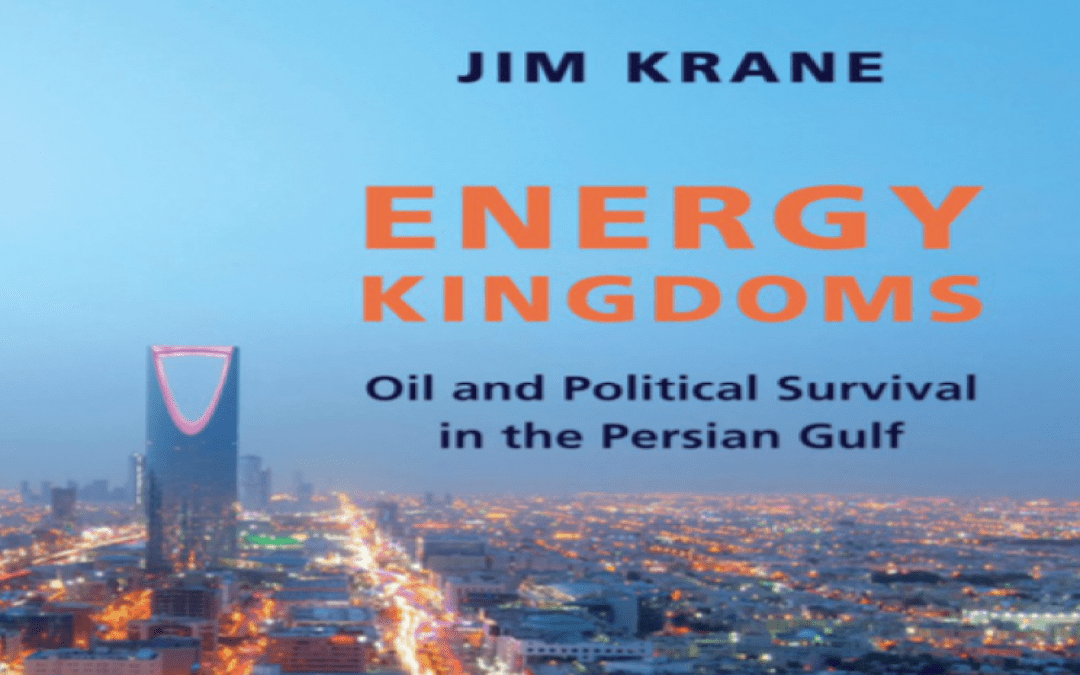 “Energy Kingdoms” is written by Jim Krane, an expert who spent considerable time actually living in the Gulf. The book analyzes; the drivers behind the Gulf States’ domestic energy policies, the internal consumption problem that came out as a result of these policies and how the regimes dealt with the problem in a way that defied the extant political theory on rentier states. It exclusively focuses on six countries in the Persian Gulf: Saudi Arabia, The United Arab Emirates, Kuwait, Qatar, Oman and Bahrain. Exclusion of Iraq and Iran is intentional due to dissimilarities, such as the regime type and historical development which become important in the narrative.

Krane starts out by analyzing the pre-oil period and concludes that the region experienced the colonialism different than the other regions as the colonial powers were unwilling to send their citizens to this isolated and rough part of the world. Thus, rather than formally colonizing the region, they pushed for concentration of power in “favorable” tribal ruling families through which they could seek interests. They also pushed these leaders to define their boundaries for ease of control[1].

The durability of the ruling families in the region despite rapid political changes in the rest of the globe is puzzling. The author compares this oddity with an analogy where the North American Indian tribes retain power despite widespread immigration and invasion. Krane explains this political phenomenon with “rentier state” theory, which claims that – rentier states exchange welfare benefits for political support through an unwritten social contract between state and society. The key is to avoid taxation which is the link for accountability between the government and people in democracies. It is fascinating to see that this system worked despite numerous political storms such as pan-Arabism, modernization, globalization and even violent extremism.

Gulf monarchies survived by buying the support of their people[2]. Once oil arrived it became the chief source of rents. The windfall of 1973 where the gulf monarchies were able to increase their revenues immensely allowed them to go “all in”. Saudi Arabia dismantled tax bureaucracy and even stopped collecting social security contributions. One important step was that, Kingdoms also started to almost fully subsidize energy services such as electricity, water and gas for transportation. The state was funding the national treasury by the oil export rather than taxation.

However, the picture is not all rosy for the autocrats, the theory also lays out a fundamental problem: once the rentier institutions were established, they would prove hard to change. First generation that experience the free handouts would be grateful for them, but the next generations would claim them to be entitlements. The bargain would seem sacrosanct once the precedent is established. Overtime the subsidies would morph from ruler’s gift into political right of the citizen.

So, what would happen if the rentier state regime is pushed to takeaway those entitlements? Political scientists likened the removal of the subsidies to a massive tax increase in a democracy. Without the democratic legitimacy, survival of the regimes depended on safeguarding the patronage network. Since the welfare services to the local population is the most important part of the political legitimacy, cutbacks would bring political instability and possibly the collapse of the state. The main finding of the book answers the question of whether this proposition is true or not.

The one crucial effect of the energy subsidies in the monarchies, is on the energy consumption. There is an alarming trend of increasing energy demand in the region.  Gulf monarchies are now consuming more oil than the “Japan, India, Russia – or the entire continent of Africa”[3]. Population, income, technology, climate and price all play a role in high demand of the region, but the consumer behavior is the most important in this case. Consumer behavior is mainly driven by the price of energy. Price dictates the consumer decision on how much fuel, electricity, water[4] etc to use. Also, low prices give little incentive to buy energy efficient products or replace low efficiency systems such as old air conditioners.

For gulf monarchies energy subsidies and consumption have double effect; they manifest themselves in revenues as well as costs. Arithmetic reality is that; whatever the monarchies spend on domestic consumption comes out of the exports.  Average percentage of oil production, that is consumed domestically, rose from 8% in 1960s to 24% after 2010[5]. In one striking example Saudi Arabia uses 30% of the oil it produces in domestic consumption[6]. Natural gas is no different, despite the abundant gas in the region, all gulf monarchies except Qatar are net gas importers. The problem becomes worse as the associated gas (byproduct of oil) becomes insufficient and extracting tight gases comes with cost. As a result, the burden of subsidies on the national economy kept increasing overtime. In 2014, subsidies reached to 9.5% of GDP for Saudi Arabia, 4.4% for UAE, 5% in Kuwait and 9% in Oman.

Increasing cost of subsidies along with the opportunity cost of lost revenues pushed the rulers towards change. The first to act in the region were Iran and Dubai. Iranian solution was to come up with a tiered price scheme along with cash deposits instead of subsidies followed up by a price increase in electricity and petroleum products. These efforts halved the subsidy burden and also resulted in a 10% decrease in energy consumption. Price increases later on was implemented to combat the effects of inflation. As a result, Iran’s energy subsidy burden went from 25% of the GDP in 2010 to 4% in 2016. Dubai’s initial efforts to increase prices came in 2010 but as the Arab Spring set on, the prices were quickly rolled back. An eventual increase in electricity prices of 15% managed to stick despite protests.

Author conducted a poll in 2011, after the initial successes of Iran and Dubai in 2011 and the results showed that, only 42% of the population in gulf monarchies thought they were entitled to free energy and water. Unlike the political theorists predicted, people showed inclination to support hardship measures, if it was distributed fairly and explained to them well.

Reforms in Saudi Arabia came after Muhammad Bin Salman took power in July 2017. Saudis were initially very careful with the price increases and tried to shield the poor as long as they keep the consumption low[7].  Salman fired the Minister of Water and Electricity when he suggested citizens “drill wells” in response to the public outcry. Saudis followed with 260% increase in electricity and started selling gas at prices approaching the US prices. Much like Iranian policies, Saudis also started a cash compensation program for the poor. Cash compensation along with intensified repression persuaded the Saudis not to take the streets. The publicization of wasted resources and national interest arguments also played a role in convincing the Saudi public. Price increases also changed the consumer behavior and electricity usage actually declined.

The experiences in Qatar, Bahrain, Oman, UAE and Kuwait also resembled Saudi experience with some variation. The surprising part was that unlike the rentier state theory predicted, in none of the countries there was a large uproar when the subsidies were taken away. Prices were raised usually without replacement benefits. A combination of increasing consumption, fiscal realities, external pressures, changing leadership and threat of chaos in the region upon Arab Spring, resulted in a set of empirical evidences that oppose the rentier state theory. Citizens of these states held security and progress over entitlement. Getting rid of the unsustainable subsidies actually streamlined and strengthened the political systems rather than threatening it.

“Energy Kingdom” sits at the intersection of political theory, history and economics for the Persian Gulf region from an internal consumption aspect. The experiences of the author reflect well in the book along with his meticulous research. He is able to support his claims almost always with empirical evidence. It is possible that the political implications of author’s findings on rentier theory may change based on different regime types with varying authoritarianism, previous democracy experience or religious make-up of the population, which is admittedly out of scope of the book. I am also content that book has very good “readability” and author manages to use a style that keeps the reader connected to the topic. Although rare, there are dubious comparisons, perhaps given for the dramatic effect. For example, author compares the energy consumed in the “largest homes” in Saudi Arabia with the “average” households in US and UK and finds differences in the order of magnitude. Scrutiny reveals later that, over 50% household in Saudi Arabia average at the same levels with US. However, overall, I believe “Energy Kingdoms” is a well-researched and well written book that would benefit anyone interested in oil and the Middle East.

[1] It should be noted that British were the main architect of this system and they exerted considerable influence in the region until 1971.

[2] Gulf sheikhs signed treaties with the foreign powers, because foreign powers provided rents as part of the bargain. Sheikhs considered this as personal income and a source to fund rentier structure.

[6] Part of the reason is that Saudi’s are still burning oil to generate electricity – a very inefficient method. 70% of the all electricity consumption goes to air conditioners. Seasonality of demand worsens the situation by requiring investment in power generation that is only used in few months of the year.

[7] They also executed 47 Shiite prisoners including a well-known Sheikh, which is interpreted as an effort to obscure the raise in energy prices