One month ago, on October 17, 2022, Germany’s chancellor Olaf Scholz made a move that raised question marks for many domestic observers. Precisely, he used his chancellery authority, a power he holds according to the German constitution, to settle a fundamental disagreement between his coalition partners of the Greens and the Liberals about keeping nuclear power plants in service.

Although Scholz managed to settle this one main discussion point among his coalition partners, the fact that he was driven to make use of his exceptional power raises questions about the state of unity and progressiveness within his government.

The debate on nuclear energy, therefore, is a symptom of a potentially greater underlying conflict and context that threatens the German government’s workability completely. Especially Scholz’s ‘Zeitenwende’ agenda, referring to the foreign policy ambitions of his government, requires unity and cooperation, two values that seem to be on the line.

1. Government Pressure from Inside: Greens against Liberals

Although chancellor Olaf Scholz is formally the head of the cabinet, the government is visibly run by at least three people. In this triumvirate, Olaf Scholz arguably only takes a bystander role while Minister of Economy Robert Habeck of the Greens and Minister of Finance Christian Lindner of the Liberals contend on emerging issues. When the coalition was agreed upon in 2021, it could already be anticipated that tensions between the Greens and the Liberals would become the hallmark of the legislative period. The two are remarkably different in their political ambitions and opinions in many regards.

These differences strike down as diametric standpoints in the heated debates across German society. While the Greens push for a transition of mobility policy, the Liberals assume the role of an “advocate for car drivers”. While the Greens called for massive investments in climate protection, the Liberals refused to loosen the constitutional debt brake.[1] Issues like these showcase the potential for intra-governmental disputes which also personate in the leading figures of Ministers Habeck and Lindner.

With two stormy coalition partners clashing from time to time, Scholz’s SPD is contained in the middle with the media focus often being put on either Habeck or Lindner, but less on the chancellor. In this situation, Scholz needs to balance out opposite standpoints and misses the capability to meaningfully shape his government which is overshadowed by occasionally rising tensions.

These tensions also soar because the Liberals (FDP) came under increasing pressure by the election results in four German regional states. Experiencing heavy losses, while SPD and Greens performed well, Lindner’s party appears to be attempting to carve out its profile again at the national level by seeking new clashes with its natural rival, the Green party. Yet, in the same elections, the Greens have received validation for their policies causing concessions to the FDP to become unlikely which creates a dynamic of aggravating antagonism.

One harsh dispute has now halted the German government for the last couple of weeks. In the wake of the European energy crisis, Lindner’s FDP called for the continuation of operation of the last three remaining nuclear power plants, which would also entail the purchase of pricy fuel rods. Habeck’s Green Party on the other hand is for the phase-out plan. The Green Party, however, buckled in search of a consensus and suggested continuing the service of two out of the three remaining plants to maintain the security of the energy supply in winter. The value of nuclear power plants in general, but especially that of “Emsland” in Lower Saxony, is harshly disputed and criticized for being inefficient and unnecessary.

To end the smouldering conflict, Scholz used his authority to set the government’s guiding principles on October 17. Attempting to establish common ground between the Greens and the FDP, he made clear that all three power plants should remain connected to the power supply grid, yet no longer than April 2023. The chancellery power that Scholz used is granted to him by article 65 of the German constitution. However, considering that former chancellors, namely neither Angela Merkel nor Helmut Schmidt have never used it, the case is exceptional. Some even argue this constitutional power exists as long as it remains on paper and loses its might when used.

The German traffic-light coalition government, therefore, appears to have stalled due to this dynamic of friction pre-empting progressive cooperation. All three parties attempt to leave their mark on the government’s projects. Considering the multidimensional crises that his government is faced with, Olaf Scholz is arguably in need of unity between the parties, also to forward his Zeitenwende agenda.

The most recent debate has shown that the government is fragile and that debate about essential issues can flare up at any time. It is yet to be awaited if the government can remain a sense of unity and will be able to steer through the crises that await ahead.

2. Pressure from Outside: Society’s Turning Tides in the Wake of Crises

Olaf Scholz’s government experiences pressure from various sides and a lack of unity could be detrimental. The current energy crises, Russia’s invasion of Ukraine, and the looming climate crisis have raised expectations from him and his ministers to act. Although his government has, among other things, meaningfully supplied weapons to Ukraine, scaled up investments into defence, let loose 200 billion Euros to halt the increase of gas and energy prices, or introduced cheap public transport to incentivise people to switch from car to rail, society seems undecisive and the government still polarizes.

Public opinion has shifted. While the traffic-light coalition was at first welcomed as a fresh start of German politics after 16 years of Angela Merkel, the tides have turned. In recent polls, the SPD has fallen behind the CDU and especially the FDP is seen to almost halve its election result of 2021 if elections took place now.

Figure 1: Since forming the government and especially since the Russian invasion of Ukraine, the polls have developed negatively for the parties in government (Source: Germany – national parliament voting intentions, Politico)

The growing dissatisfaction with the traffic-light coalition is also seen in the politicians’ popularity ratings. Throughout the last years, Robert Habeck has been leading these rankings supplying him with validation for his political decisions. Yet, with him having assumed the demanding post of Minister of Economy, his favourability ratings have fallen. Certainly, this is also due to the obscurity that accompanied his now-sacked plan to introduce a gas levy on consumers.

The polarized opinions about the government’s work strike down as massive gains for Germany’s far-right ‘Alternative for Germany’ (AfD). The right-wing party stages impactful protests gathering thousands of people to call upon Scholz’s government to resign. Furthermore, it appears to be one of the main profiteers of the crises politically. Especially in Eastern German states, the party dominates the polls either leading them or following as runner-up.

Yet, with winter being imminent, and gas and energy prices on the rise, tensions in society will most certainly also soar leading to additional pressure on Scholz’s government and an increasing challenge from the far-right. Figure 2 shows the fluctuation of energy and electricity prices in Germany since the start of the Ukraine war. Especially the prices of gas have soared, an accusation to be heard and seen in recent protests all over the country. Appearing too busy with internal fights and not delivering effective remedies to the energy crisis could, therefore, prospectively weaken the governments’ assertiveness. 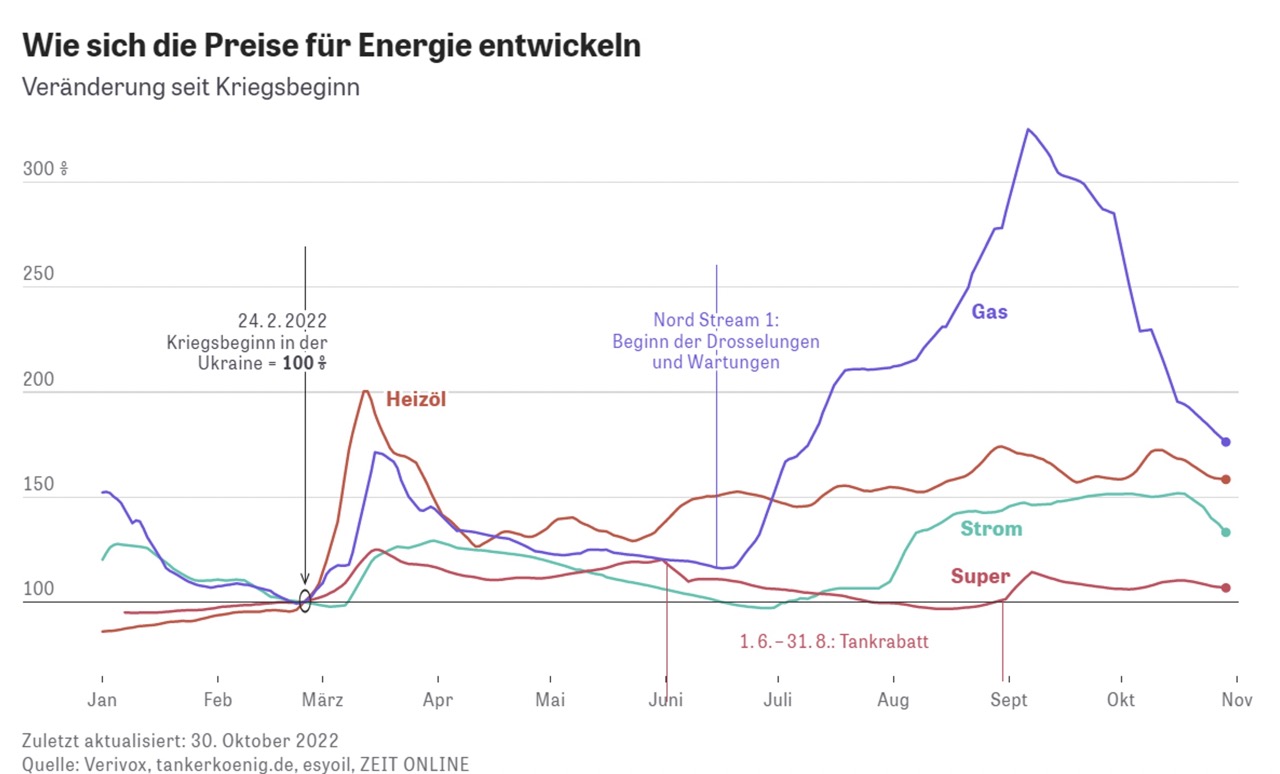 Figure 2: The fluctuating energy and electricity prices are seen as a cause for rising societal tensions and discontent with the government since the start of the Ukraine war (Source: Energiemonitor, Zeit.de)

3. Under Pressure: Can Scholz’s Government Deliver on the “Zeitenwende?”

Within the context of domestic pressure rising and sustaining conflict among the coalition partners, Germany’s government appears to have trouble delivering on Scholz’s extensive ‘Zeitenwende’ agenda which foresees massive investments in defence, reforms of the European Union, and increasing responsibility fulfilled by Germany in the European Union and NATO. Considering the scale of the agenda, losing trust in the workability of the government puts support for this main project at risk. Further, the sustaining stress makes the government and chancellor Scholz appear weak which does not do justice to the projects that have so far been completed.

The stress that Scholz’s government is exposed to internally and from outside has, therefore, now culminated in Scholz’s decision to make use of his chancellery authority to end a dispute between his quarrelsome coalition partners about the closure of nuclear power plants. On the one hand, this decision signals how Scholz attempts to keep up a progressive image of his cabinet that is not being slowed down by internal arguments. On the other hand, however, it signals the problems of this very government to find common ground in its expectations for the country’s future.

With his decision, Scholz has underscored his formal role as leader of the triumvirate consisting of Habeck, Lindner and himself. Yet, by doing so he has overridden his partners and weakened their political efficacy in government.

Furthermore, the technological necessity of Scholz’s move is not clear. Considering the narrative of ‘Zeitenwende’ (literally meaning “turn of an era”) the time and energy of the discussion could have been used to explore ways to speed up investments into the renewable energy sector, find solutions for increasing energy efficiency, and becoming sustainably independent from Russian oil and gas. Yet, the overly politicised debate on nuclear power rather slowed down such a real ‘Zeitenwende’ and blurred the view on what is necessary to tackle the problems of today.

The way that Scholz has now put his foot down Although the chancellery authority is an ambiguous power and the decision is a weak one, Scholz arguably did not have any other options if he did not want his government to remain in constant status of dispute. By overcoming the nuclear debate, the coalition partners can now focus on finding renewed unity which will be needed to deliver on the Zeitenwende agenda. Scholz has, therefore, arguably traded cooperation in his government with workability.

Scholz’s decision, however, remains a temporal one. It is not to be expected that the debate on nuclear power has been settled and shelved. The persisting energy crisis will cause discussions on the matter to flare up again at the latest in the coming year. Furthermore, the Greens and the FDP might have been silenced on one issue, yet more disjuncture awaits and fundamental discussions about various issues could halt government dynamics any time.

For now, the government needs to find a new working method which will only be achieved through long-term mediation and governmental leadership by Scholz. The recent decision is certainly not enough. If successful, the signs are good that Scholz’s Zeitenwende project receives further backing; at least for the time being.

[1] The debt brake is a fiscal policy rule which was written into the German constitution under Angela Merkel’s government in 2009. It aims to limit structural budget deficits and the issuance of new debts at the federal level.

Mats Radeck is a research assistant intern at Beyond the Horizon ISSG. He also follows a master’s program in International Relations with a special focus on “Global Conflict in the Modern Era” at Leiden University.