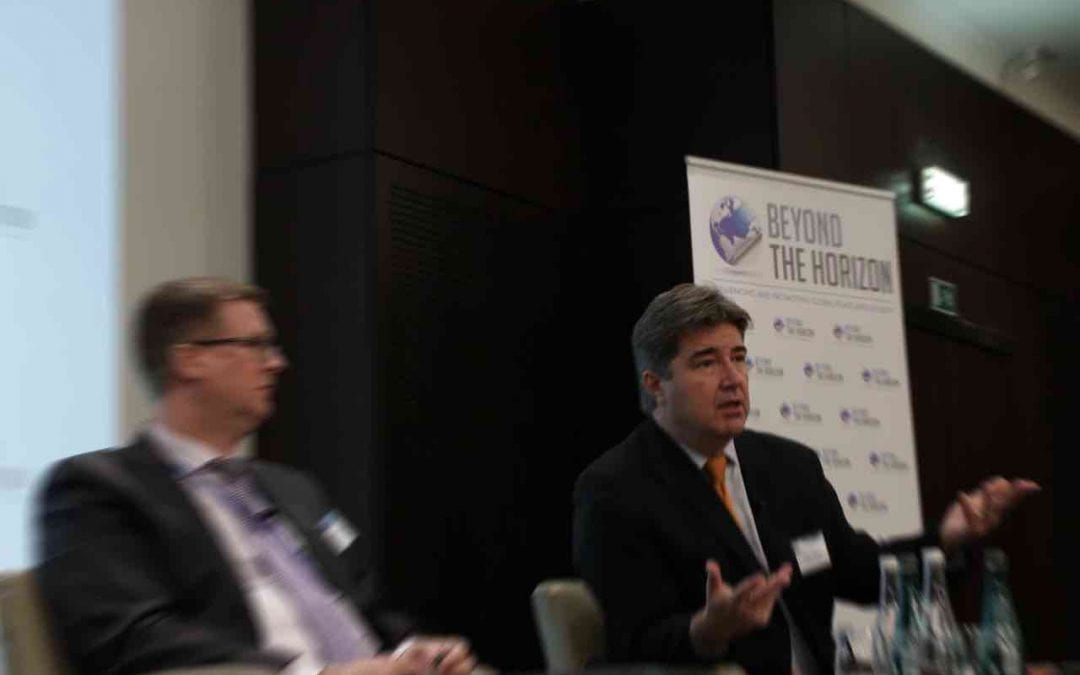 Presently, the European Defence Fund is not yet a reality but there are two pilot programmes that are already up and running. First, I would like to take a step back and qualify the impression that, I think, is emanating from previous information: to some extent the development of the European Union’s new defence dimension is mostly reactive, reactive to this new paradigm, security over Crimea. Well, I also qualify this may be the reason why the proposals on the table gained traction and developed so fast, but is not the main reason why the proposals were on the table. Because, the first Commission Communication on European Defence is dated June 2013, and the European Council, our leaders, adopted conclusions on Defence in December 2013. So, the case was there whether or not Crimea would have been illegally annexed.

And also, Jean-Claude Juncker, the current President of the European Commission, had set those priorities already. Because defence is an important element in the European integration project. And I would say, and I would underline it very strongly, that for the European Commission the development of the European Union Defence dimension goes hand in hand with the development of EU-NATO cooperation. Five years ago, ten years ago, EU officials and NATO officials would not speak to each other. We would not speak to each other because there was no contractual basis, we basically had no interaction. Not that we were not interested but we did not have common interests. Whereas, today, we are constantly talking with each other about many things of mutual interest:  certainly, NATO is of use for the EU and vice-versa.

Some EU instruments, which were conceived only with a civilian dimension in mind are extremely useful for NATO. For instance, the Commission has developed a number of networks over the years to protect critical infrastructures, to protect them from accidents and to prevent from technical failure. But that can be used to prepare ourselves for man-made attacks. So, actually I would argue it is actually useful for NATO to build on, at least in some areas, what the EU has already achieved. And that is happening and it is happening in part thanks to what we are doing with PESCO and the European Defence Fund. This is also the case for military mobility. We, the EU, are interested in having a substantial impact on enhancing the speed at which military assets and goods can be moved throughout the EU. But that is clearly very much also what NATO was aiming at. We are not doing it for NATO but for ourselves but we are tackling a NATO priority as well. NATO was not able to tackle it on its own because NATO does not have the regulatory powers that the EU has. And the same is happening also in the field of hybrid and many others.

So, I would say it is a false dichotomy to say, at least it is my personal belief, that the development of the EU defence dimension is undermining or duplicating NATO. It is very much strengthening NATO in practice. I was in Washington recently and I heard people say “Well, we still address security in the European continent through NATO” or “We still see security in the European Continent only through NATO”. Well, the EU is becoming an actor and therefore that vision must be amended. We are not a military organization; we are not and we will not enter into collective defence. So, in that sense there is no problem. But we are becoming a security and defence actor and therefore if one wants to look at the security and defence on the European continent it must start taking into account the EU. Or otherwise its vision will be partial. So that is what needs to be adjusted. As long as you adjust the focus, it is clear that the EU is certainly helping NATO.

What we are doing on military mobility is upgrading the infrastructures so that they can also be used by military assets. The military assets developed through or with support from EDF will be in the hands of the member states, not in the hands of the European Institutions or the EU as such, let alone the European Commission. No, in the hands of EU members states. And since 22 EU members states are also NATO allies, that will certainly serve to strengthen NATO. It is difficult to see how it would not. Our military mobility programme is designed on a 50% co-funding ratio. The EDF is also designed on the basis of co-funding percentages which in the case of prototypes can go up to 20% (10% more with the PESCO bonus), but certainly a large percentage will have to be funded by member states as well. So, in essence, by putting these instruments on the table we are forcing our members states to, on the one hand align and coordinate their national defence expenditures around some common objectives, but also to increase their net defence spending overall. Certainly, not to decrease it. This also goes in the direction that NATO is pursuing.

Finally, on the question of third states. The European Commission has a very small role to play in PESCO but when it comes to the European Defence Fund, the discussion is over, it has already been agreed by the Parliament and the Council. The question is not about whether these criteria are discriminatory or will lead to the exclusion of U.S. or U.S. controlled entities in practice, but also of others such as Canadian, Norwegian, Turkish or whatever. The answer is no. That is clear  if one reads attentively, and you know that when it comes to the EDF, the European Commission will implement it . The conditions that apply to third country, or third company controlled or non-EU controlled companies are security based. They are objective, they are transparent and they do not impose any requirement on non-EU controlled entities that is either not imposed also on or that EU controlled entities do not have to comply with. In addition, basically these conditions are very similar to the ones that other actors impose on foreign participation in their own defence programmes. And what we are aiming at is to make sure that non-EU controlled companies, if they participate in EDF, will behave fully as EU-controlled companies, full stop! Nothing more, nothing less. And that means that whatever we produce in the context of EDF has to ensure security of supply, so that the participation of a non-EU controlled company cannot, at some point, endanger the continuation of the project. Also, that the generated intellectual property will first and foremost benefit the European Union and its entities. So, for foreign or non-EU controlled base in the EU entities, that implies a firewall. These are exactly the same conditions that EU companies have to comply with when they participate in foreign defence programmes. Dr Lazarou mentioned that when European companies participate in defence programmes in the U.S., they work for the U.S. That is and this is how non-EU controlled companies should do when working for the EU. And thirdly, whatever we produce in the EDF must be free of foreign restrictions. Restrictions of use and restrictions of deployment. With EU taxpayer’s money support it would be unreasonable, it would be unacceptable that we need to ask for permission to deploy the product, a tank or a jeep or whatever it is, for a CSDP operation in Mali. Or if we want to export that good amongst ourselves or to third countries, we have to rely on somebody else’s permission. That would not be acceptable and we will not accept it. But, third countries can amend their regulations, can adapt their regulations so that their companies can participate in EDF. That is certainly what we would like.

So having said that, it should be clear that what we are doing within the EU, strengthens NATO quite substantially, including what we are doing, what we are trying to do on the capability development front, which is by no means closed to the participation of non-EU companies complying with totally objective and security-based conditions.

Last but not least, I would say that actually there is no discrimination for non-EU NATO Allies when it comes to the European Commission as regards the EDF, including those members of the EU that are not NATO Allies or belong in PESCO. I would like to make one thing very clear: the European Defence Fund has a 10% bonus for those projects that come from PESCO. However, PESCO is by no means the only door to EDF. If a project is sound and good, if it brings different companies from different member states, if they have the finance and they it tackles priorities collectively agreed in the context of the NDPP and the EDF, the project will be selected and receive funding. Whether or not the member states that host the companies that participate in that project belong to PESCO or not, NATO or non-NATO. In practice, in most cases there will be some of those elements but it does not necessarily have to be like this.

We not only have NATO NDPP, the EU´s CDP, the annual work programme of the EDF and its call for proposals, which will ensure coherence. We also have 22 members of the EU that are also NATO Allies. So, it is only in their interest that what they do with the left hand is at least compatible, if not fully coherent, with what they do with the right hand. Certainly no one is aiming at something different.

It is also important to recall that EDF or PESCO will not alter current European rules on defence procurement. The rules are set in directives and we are not going to change them. There will be no regulatory change so as to buy less American or another NATO ally´s defence assets. We do not have, and we are not planning to have a buy-European act on defence.

* Diego de Ojeda, Representative to the PSC and European Commission Head of Unit for Coordination of Foreign, Security and Defence Policy Implementation