The Rise of Illiberalism by Dr. Heather Grabbe* 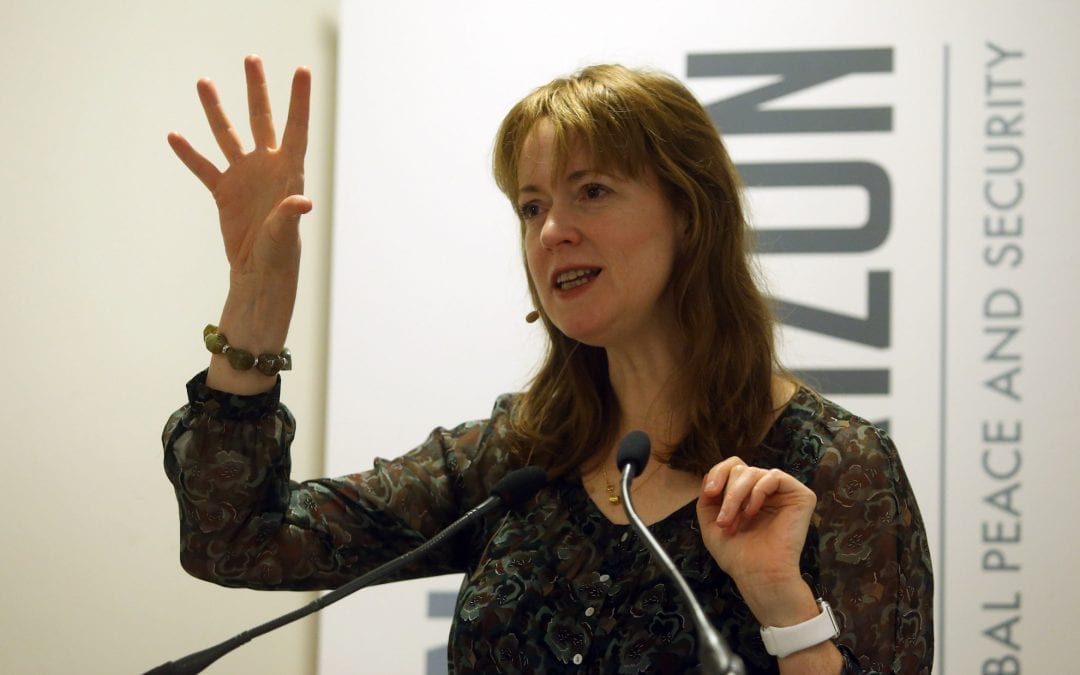 The question is, if is there in fact a collapse or is there something more of a lapse, because that seems to be the assumption often in Brussels in terms of EU policy making but what we are living through our extraordinary times at some point that we will return to normal there is a new US president and maybe things will just simply get better and will return normal. I think this is not actually a collapse, what we are seeing is that there is a significant erosion, but I suspect that, this erosion is not a lapse, it may well be permanent.

Over the past century both the Europeans and the Americans have been quite successful at shaping their images in the world but now those images are being shaped for them to a much greater extent. There are plenty of other actors that are promoting very different values or counter narratives. There is the civilisation narrative which you hear both from Moscow and Beijing.

There are also counter narratives that come through new means, it`s not just governments territories it`s also new TV channels but relatively new like Al Jazeera, Russia Today, it is also social media. There is no longer any monopoly over international relations, the public as well domestic politics has a much greater role than it used to these national relations. Populist politics is becoming rather widespread and we see rising illiberalism in many parts of Europe and other countries, for example Brazil.

Populism is the dark side of democracy. Populist politicians usually portray themselves as I am the one who can speak the voice of the people who can connect it directly into the pure people and their general will. In that populist view of the world, foreign policy is something you enter into only because you really have to, because if you are the strong man leader who is tapping directly into the will of the people, who would you negotiate with anybody especially foreigners especially people who are not like you so suspicion of foreigners and suspicion of elites who negotiate with other elites is built into the populist view of the world.

The ratio of populist vote was 12 % in the past but now it is getting higher in many countries including EU Member States, 25 % of the votes even 30 % of the votes are now in favor of populism, that is new that is really new. The big problem with the populist view of the world is that is not realistic, that is actually an illusion because it dense the facts of interdependence.

Over the next a few years the danger is that the populist illiberal lapses would last for long enough that we will not have prepared for that major transnational and intergenerational challenges which are coming, and this is really a big danger.

We need to prepare for two major challenges that require a rules-based order which required transnational solutions and really require robust comprehensive policies. The first one is of course climate change which is going to be a massive disrupter, and which will increase many of the pressures that populists are now using very effectively in their narratives to raise fear in the population.

The second one is nonmilitary means of warfare. It is not just about the war of the robots, it is also about asymmetric warfare of a very different type of undermining the trust and faith of voters in the whole democratic process. if you look at the various studies that have been done on what happened in the German and Italian elections last year, what may well happen in the European elections next year, you can see that this information is not necessarily pushing the line or the interest of one party or another, it is simply undermining faith in the system altogether, telling voters that you can`t plug the system, the election is being hacked, there is no point in voting, none of these parties is representing your interests. That is a very different kind of undermining and it is a very strong one, it is a very important one, because it means that if you have voters withdraw in our system, you disorder functions.

How to keep the narrative together, I think one of the key things is actually to talk about, instead of the typical argument which appears very often in security-based – it is about values versus interests- to think a bit rather as they about a hard choice between short term stability and long-term stability, so in terms of the short term and long term, the key question is what keeps societies stable and what keeps the regimes in check so that they don’t go to war so they don’t pick fights with their neighbours nor they think about these particular issues.

I just point out the way that the undermining of the stability of the liberal international rules-based order happens because of this idea that you frequently hear from populists, first of all they say the rule of law really doesn’t matter, rule of law is optional, I have a direct line to my people, but they are not looking at the fact that for example the single market most economic prosperity is underpinned by the rule of law, because that is what provide stability for investment for trade for business.

Once you have very social tension, there tends to be illiberalism of populism depends on a kind of constant mobilisation of by the leader of the public against external threats of various kinds, so if you run out of external threats if you actually have reasonably good relations with your neighbours, you need to create threat, you can start by blaming Brussels, you can start by blaming UN, whatever external enemy he wants to choose, but it tends to then we into some kind of conflict and of course the loss of trust and cohesion within the society and the creative dynamic of the institutions as well.

If you think about illiberal view of Europe of what it should look like, if you put together the statements of some leaders you can find populism in every country, but if you can put together their words for you what you find is in Europe that looks something like that, Citizens are very even hostile towards foreign minorities and need harsh policies to ensure that migrants are kept out minorities, minorities is a betrayal of the nation.

I think the danger we have now is that you resolved the really major long-term transnational intergenerational problems and also questions of how to deal with problems with neighbouring countries actually reduced by in the corner of the world and by various populist leaders in Europe. What we deal with long term and undermining long term stability is of course dangerous and it has an immediate effect particularly and EU policies towards neighbouring countries. If we could actually focus on what needs to be faced then it is much easier to make the case for international cooperation for continuing integration and for having some kind of rules.

* Heather Grabbe, as both the director of the Open Society European Policy Institute and director of EU affairs, works to ensure that open society values are at the heart of EU policies and actions, both inside and outside its borders. From 2004 to 2009 she was senior advisor to then European Commissioner for Enlargement Olli Rehn, responsible in his cabinet for the Balkans and Turkey. Before joining the commission, she was deputy director of the Centre for European Reform, the London-based think tank, where she published widely on EU enlargement and other European issues. Her academic career includes teaching at the London School of Economics, and research at Oxford and Birmingham universities, the Royal Institute for International Affairs (Chatham House, London), and the European University Institute (Florence). Grabbe has a PhD from Birmingham University and a BA and MA from Oxford University.