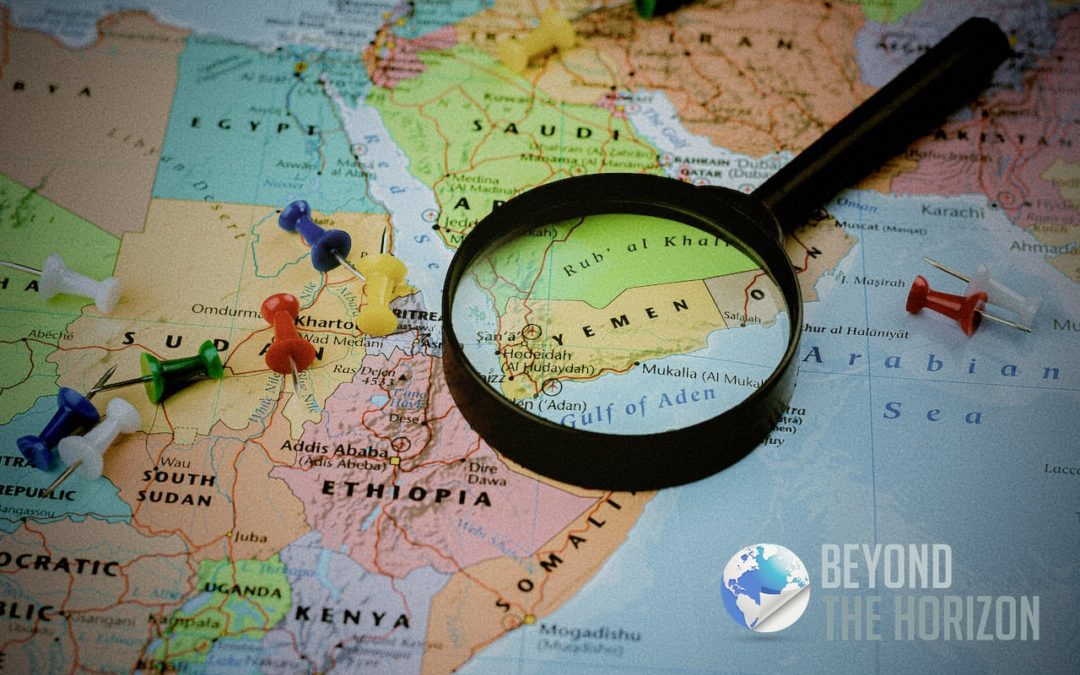 When a Saudi-led coalition of Arab states launched a military intervention against Iran-backed Houthi rebels in Yemen on March 26, 2015, the Yemeni people had no idea that they were witnessing the beginning of the costliest conflict in their country’s long and tumultuous history.

Indeed, although Yemen experienced several civil wars and military interventions in the past, none has had consequences as disastrous as the ongoing war. According to the United Nations, since 2015, the war has caused “over 233,000 deaths, including 131,000 from indirect causes such as lack of food, health services and infrastructure”. Moreover, more than 20 million people in Yemen are experiencing food insecurity, with 10 million at risk of famine.

And on its sixth anniversary, this devastating conflict is continuing at full force. Recent military escalations between the Saudi-led coalition and the Houthis in strategically important areas such as Marib, Sanaa city, and Taiz have added to Yemenis’ fears that their country’s unprecedented humanitarian crisis will continue to deepen in the coming months and years.

So what do the Saudi-led coalition and the Houthis intend to accomplish with these ongoing tit-for-tat attacks? Are they making a final attempt to gain leverage before finally entering negotiations to end the conflict diplomatically? Or are they still trying to secure a decisive military victory and end the conflict that way? And most importantly, is there any hope for sustainable peace in Yemen?

To be able to answer these crucial questions, it is necessary to examine the goals set and strategies employed by both sides since the beginning of the conflict.

The end goal of the Houthis: Controlling Yemen in its entirety

Even before the Saudi-led coalition’s first air raids in Yemen, the Houthis had one primary goal they were working towards: eliminating all their domestic rivals in any way possible and gaining control over the entirety of Yemen.

In the early days of Yemen’s 2011 uprising against then-President Ali Abdullah Saleh, the Houthis aligned themselves with opposition parties and participated in their sit-ins in several cities. But after Saleh’s ousting from power later that year, the Houthis quickly turned the tables on the opposition. They established an alliance with Saleh and together with forces still loyal to the former president, they managed to seize control of most Yemeni cities by mid-2015. Two years later, in December 2017, however, they decided that they had exhausted all the military and political advantages they could gain from their alliance with Saleh and assassinated him.

The short-lived alliance between the Houthis and Saleh was a testament to the rebel group’s pragmatic politicking and determination to gain power at all costs. Indeed, the Houthis were the only political actors in Yemen who succeeded in outplaying Saleh who was known in Yemen and beyond for his unparalleled Machiavellianism. During his 22-year rule, Saleh defeated countless political rivals – from the Arab Nasserists to the Yemeni Socialist Party and the Islah – with his cunning political strategies, but could not protect himself from being used and disposed of by the Houthis.

The Houthis’ recent attacks against the Saudi-led coalition and efforts to expand their rule over the strategic city of Marib are the next chapter in the group’s grand plan to create the conditions necessary for it to take control of the entire country.

Capturing Marib would not only provide myriad economic and security benefits for the group by solidifying its control over North Yemen, but also give it access to rich oilfields in the region.

The United Nations recently expressed concern over the Houthis’ military offensive in Marib, stating that the escalation is likely to risk the lives of one million internally displaced Yemenis currently residing in the region.

As indicated by their past actions, and apparent disregard for the human cost of their political ambitions, however, the Houthis are unlikely to give up on their desire to control Marib.

The Houthis may accept a temporary ceasefire if it – at a minimum – guarantees the lifting of the Saudi-imposed blockade on the Hodeidah seaport – the main entry point for food shipments to the country. But even if a temporary ceasefire is agreed upon, there is reason to believe their eyes will remain fixed on their potential prize in Marib.

While there is much reason to believe that the Houthis are still as determined to control Yemen as they were six years ago, they are not undefeatable.

The biggest threat they are facing, however, is not from the Saudi-led coalition, but the people currently living under their rule.

The Houthis’ inability or unwillingness to address issues like unemployment, poor healthcare, and rising gas and food prices in the areas they control turned public opinion against them. Although the Houthis officially continue to blame the Saudi-led coalition for Yemen’s humanitarian crisis, most Yemenis privately hold both parties equally responsible.

This growing public frustration over the Houthis’ iron-fist approach to local governance has the potential to fuel future uprisings against them, or at least aid the Saudi-led coalition if they breach any of the group’s strongholds.

Moreover, there are some signs of fracturing within the group itself. The Houthi leadership has maintained a solid grip on the movement for a very long time. But recently, its second-tier members have been openly criticising the group’s leadership on issues like administrative corruption and the emergence of black markets controlled by pro-Houthi elements. This seemingly growing internal discontent could eventually undermine the authority of the movement’s leadership and leave it more vulnerable to attacks by its adversaries.

Unlike the Houthis, the Saudi-led coalition does not have a clear military strategy or an end goal agreed upon by all its members. After six years of war, members of the coalition appear to have different political expectations in Yemen.

The United Arab Emirates (UAE), Saudi Arabia’s one-time main ally in the Yemeni war, for example, announced its decision to withdraw its troops from Yemen in July 2019, following bloody in-fighting between the separatist group it supported, the Southern Transitional Council (STC) and the internationally recognised and Saudi-backed government of President Abd-Rabbu Mansour Hadi.

Saudi Arabia, however, is not in a position to simply back away from the war because it became too politically and economically costly.

Riyadh’s primary objective in Yemen is to prevent its regional rivals, and especially Iran, from gaining unchecked control over the country and threatening its national security.

Saudi Arabia did not initially see the group as the main threat against its interests in Yemen. Had the Houthis showed serious commitment to protecting Saudi interests in the country when they seized power in late 2014, the oil-rich kingdom would have tolerated their growing political power in Yemen.

But after six years of war, the Saudis now have only two ways forward in Yemen.

They can either refuse any compromise and commit to continuing the war until they score a decisive military victory, or they can enter negotiations with an understanding that the Houthis (and through them the Iranians) will have a significant role in Yemen’s politics.

Both options are costly for the kingdom. The election of Joe Biden as US president and his decision to cease all direct US military support for Saudi-led offensives, put immense pressure on Riyadh to end the war. Moreover, the rest of the international community is also applying significant pressure on the kingdom to end the war swiftly due to the rapidly worsening humanitarian situation in the country.

But ending the war now and allowing the Houthis to have a dominant role in the country’s leadership is also not an acceptable option for Saudi Arabia, as it would cause it to lose significant leverage against Iran in the region.

Yemeni actors in the Saudi camp do not have a common end goal or a unified strategy to bring the conflict to an end, either. The STC, for example, is focused on establishing an independent state in the south rather than fighting the Houthis in the north, while Tariq Saleh – who now represents forces loyal to former President Saleh who months before his death switched sides and started backing the Saudi-led coalition – continues to operate with virtual autonomy outside the military command of President Hadi.

Although President Hadi and some of his allied forces – such as the Islah – remain committed to the liberation of Sanaa from the Houthis, they lack the political and military will to act independently from Saudi Arabia. They are not fully in control of their military strategies and, as such, are vulnerable to outside pressure.

All in all, no actor in Yemen’s war has a clear path to victory or a plan to end the conflict swiftly and bring peace to the country. On the sixth anniversary of this deadly war, tragically, there is no indication that the suffering of the people of Yemen will end any time soon.

This commentary was first published in Al Jazeera on March 26, 2021.