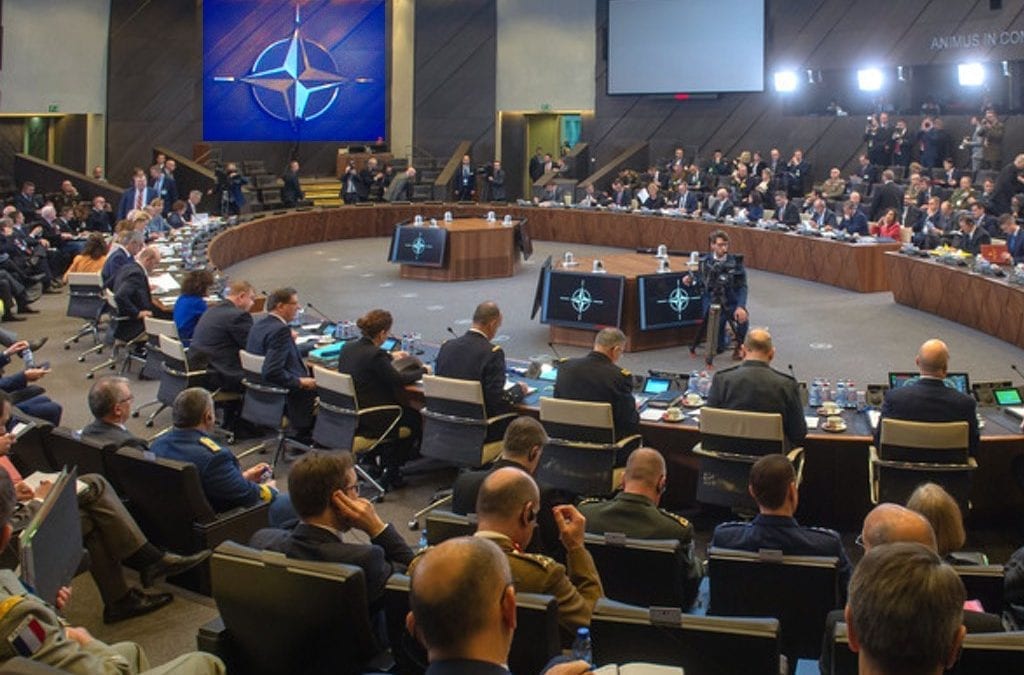 Defence Ministers of NATO members discussed pressing security challenges in Brussels between 13-15 February 2019, prior to annual Munich Security Conference. Defence Minister of the Republic of North Macedonia Radmila Sekerinska, attended NATO defence ministerial meeting for the first time. The Secretary General Jens Stoltenberg described the Alliance as “in good shape” as its approaches its 70th anniversary. Following topics were discussed during the ministerial.

In a press conference, the Secretary General said that Russia continues to violate the Intermediate-Range Nuclear Forces (INF) Treaty by deploying new intermediate-range nuclear capable missiles, namely the SSC-8 missiles and all 29 NATO Allies agree that the SSC-8 missile system is a significant risk to Alliance security.

On 4 December 2018 U.S. announced that the Russian Federation is in material breach of the INF Treaty, and warned that unless Russia returned to full compliance in 60 days, the United States would suspend its obligations under the Treaty within six months.

According to the Secretary General, although NATO doesn’t intend to deploy new ground based nuclear missiles in Europe, it is planning for a future without the INF Treaty.

The Russian Federation, on the other hand, has raised three areas of concern regarding U.S. compliance with its obligations: the Aegis Ashore Ballistic Missile Defense system; ballistic target missiles; and armed unmanned aerial vehicles (UAVs). MK-41 launcher for missile interceptors at the Aegis Ashore facility in Romania is one of them. MK-41 launchers on US warships can hold a variety of missiles including cruise missiles.

As Secretary General stated, since 2016, European Allies and Canada have spent an extra 41 billion US dollars on defence. And based on the latest national plans, this number will rise to a cumulative one hundred billion dollars by next year. All Allies have submitted their annual reports on their national plans to meet the Defence Investment Pledge. NATO reviews progress on three dimensions of the pledge (cash, capabilities and contributions).

But there are different opinions. German Defence Minister Ursula von der Leyen publicly criticized Donald Trump over his insistence that European countries rapidly increase their defence spending. “The NATO alliance is about decency and dependability, not just cash and contributions”, Germany’s defence minister said at Munich Security Conference. EU High Representative / Vice President Federica Mogherini preferred to use word “responsibility” rather than “burden”, as an attempt to refrain from its negative connotation.

Resolute Support Mission, in together, out together

Ongoing peace process, intense Taliban pressure on the ground and U.S. withdrawal decision shaped discussions about Resolute Support Mission. The Secretary General said that no decision has been taken about any withdrawal. But NATO strongly supports the efforts to reach a political, peaceful settlement. From NATO’s point of view, NATO’s military presence in Afghanistan is about providing, creating the conditions for a political, peaceful solution. NATO strongly supports an Afghan reconciliation which includes the Afghan government, the Secretary General said.

The Resolute Support Mission, which is launched in 2015, currently consists of around 17,000 troops from 39 NATO Allies and partners. Qatar and the United Arab Emirates are invited to be RSM partners.

Kosovo’s government voted on 14 December 2018 to transition its security force to an armed force, effectively announcing its decision to create an Army. Allegedly, Kosovo’s decision created political tension and distaste. The Secretary General regretted that this ill-timed decision was made despite the concerns expressed by NATO. The Secretary General underlined that NATO will remain in Kosovo with KFOR, since it is based on a UN mandate. Furthermore, the Brussels Agreement from 2013 stating clearly that the Kosovo Security Forces cannot go north without the concurrence of the Commander of KFOR, COMKFOR, according to the Secretary General.

A number of nations made offers for “Four Thirties”, namely, 30 combat ships, 30 land battalions, and 30 air squadrons, which are supposed to be ready to deploy within 30 days or less.

NATO-EU Cooperation and the EU efforts on Defence

EU High Representative / Vice President Federica Mogherini and Finnish and Swedish Defence Ministers attended the session in which NATO-EU Cooperation discussed. In a Joint Declaration in Warsaw Summit (2016), NATO Secretary General Jens Stoltenberg, the President of the European Council Donald Tusk, and the President of the European Commission Jean- Claude Juncker pledged to boost cooperation between the two organisations. This commitment was renewed with another joint declaration on NATO-EU cooperation, signed in the margins of the NATO Summit in July 2018.

At an informal breakfast, hosted by UK Defence Minister Gavin Williamson, Allies and the Ukrainian defence minister Stepan Poltorak discussed the security situation in and around Ukraine, including the Sea of Azov.

During the Defence Ministerial, Croatia, Hungary, Slovakia and Slovenia agreed to establish a deployable Regional Special Operations Component Command (R-SOCC) for small joint operations under the leadership of Hungary. Austria will also join to Quartet of NATO members.