Green or Brown Future for The World: Geopolitical Dimensions of The Eu Green Deal 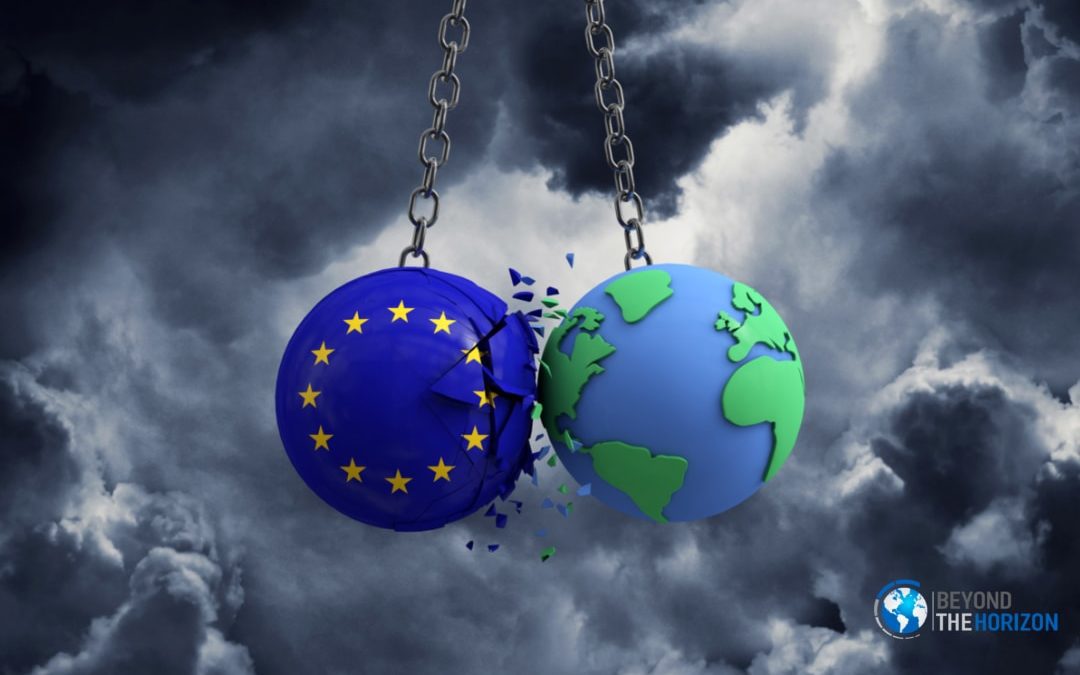 Rising energy prices, ongoing negative impacts of the pandemic, and dependence on Russian natural gas have created a harsh political conjuncture for the European Union (EU) to implement the EU Green Deal’s regulations, including the strengthened Emission Trading System proposal, which was rejected by the EU Parliament on June 8. While CEOs of the carbon-intensive industries demanded the adaptation of a slow approach in phasing out the free carbon allowances by waiting for the establishment of an effective Carbon Border Adjustment Mechanism (CBAM), some members of the EU Parliament, including Muhammed Chahim, the reporter of CBAM proposal, argues that watering down the proposed ETS and CBAM regimes would not be compatible with the overall emission targets of the EU Green Deal. The internal debates about the Fit for 55 Package, however, make it difficult to understand the geopolitical implications of the EU Green Deal on a global scale. At the dawn of the climate change-related disasters, the EU Green Deal has great potential in the transition to a more democratic and clean international order by changing the competitive nature of international relations and spreading a collaborative economic model.

The urgency of tackling climate change

The recent hot waves in India and record-breaking temperatures in Spain are the recent clear indicators that show that climate change has become a conspicuous global problem rather than an anticipated future phenomenon. There were debates in India as the second-largest wheat exporter, about restricting the amount of wheat exported. Scientific research indicates we are less than 9 years from exceeding the 1.5-degree global warming threshold. During the voting process of the eight regulations related to the Fit for 55 package, Frans Timmermans, the Vice-President of the Commission leading the latter’s work on the EU Green Deal, warned the members of the EU Parliament that the climate change is going to intensify and inaction of the EU will exacerbate its consequences. In this context, the EU Green Deal is the only viable and strong international project to use the last chance of the current generation to save the welfare of future generations. 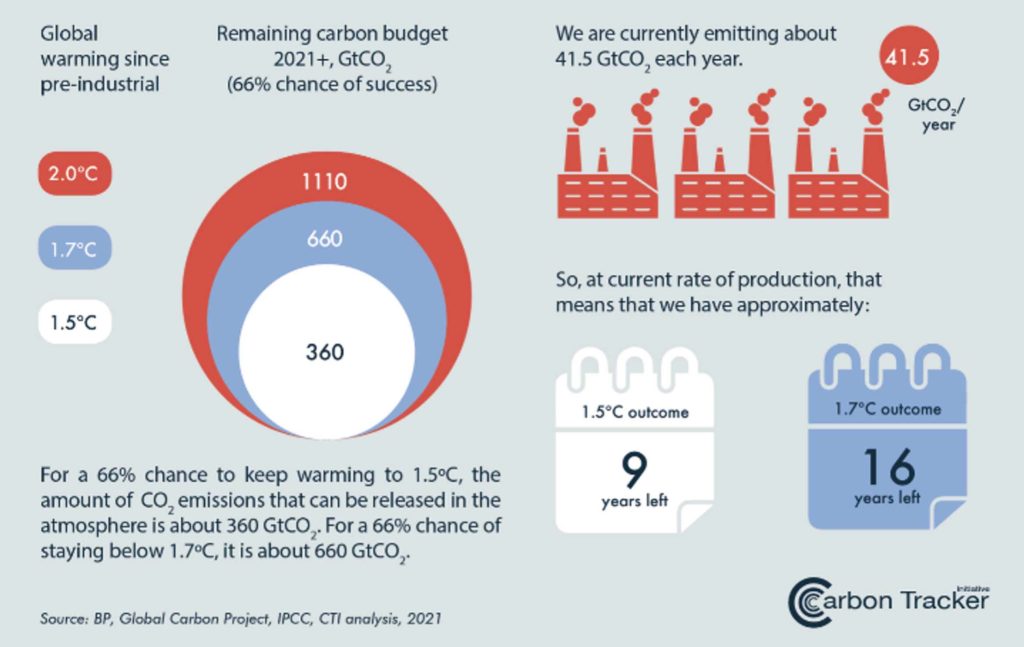 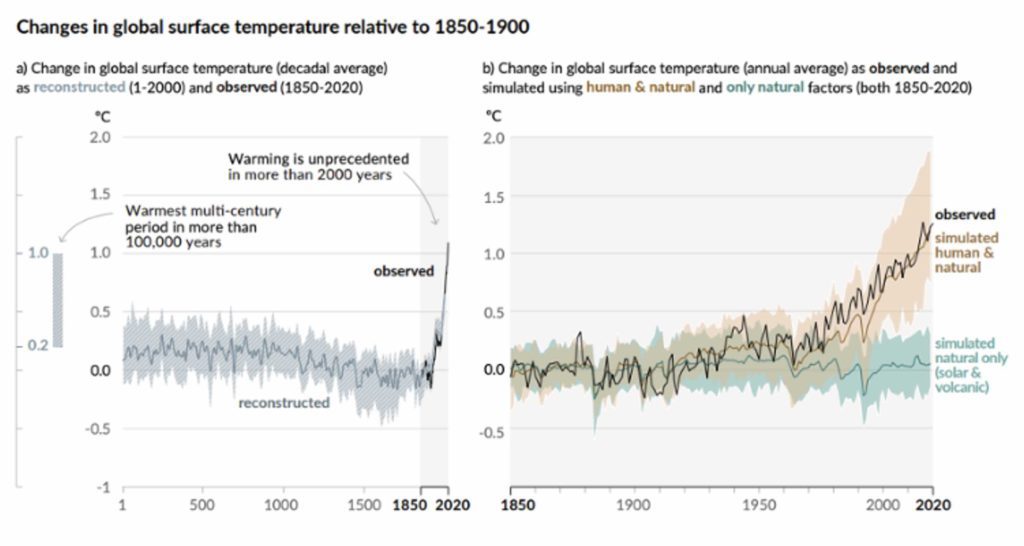 The EU policymakers are well-aware that minimizing the carbon emissions of only the EU is not enough to prevent the ongoing harmful effects of climate change as the EU only accounts for 8% of the global emissions. That is why the CBAM proposal is designed to force trade partners of the EU to reduce their emissions, not to allow them to escape from the financial burdens of carbon prices on certain exported products to the EU, including cement, steel, electricity, aluminium, and steel-iron. Most of the EU’s trade partners are also among the countries that are the top greenhouse gas emitters. The EU Green Deal has accelerated the efforts of other countries to establish their own Emission Trading Systems to allow the payment of carbon prices domestically. The current CBAM proposal excludes exporters from buying CBAM certificates if there are efficient ETS (Emissions Trading System) mechanisms in their countries. The emergence of new carbon markets around the world will force the representatives of the industries to reduce their carbon footprints. 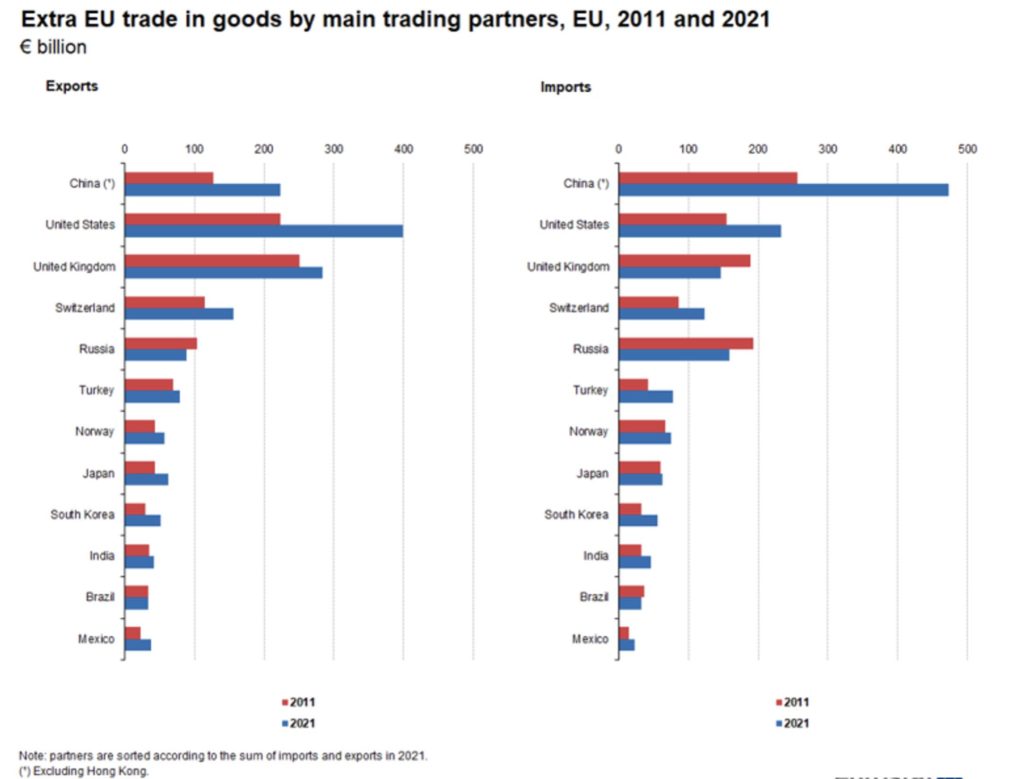 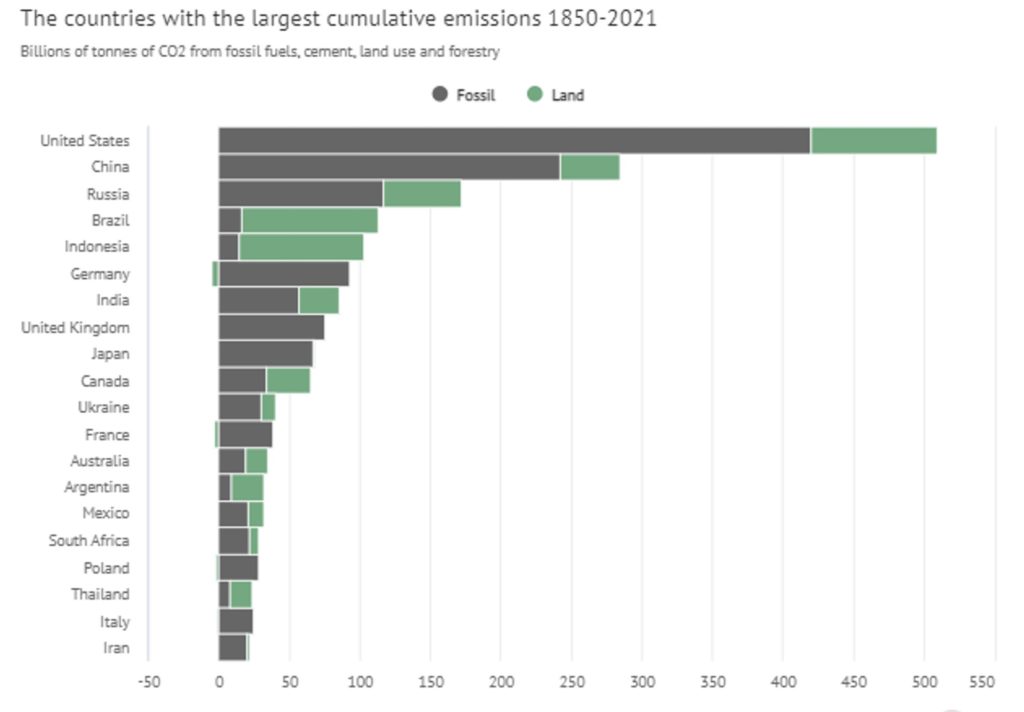 Figure-5: The Cumulative Emissions of the Countries 1850-2021, Source: Carbonbrief 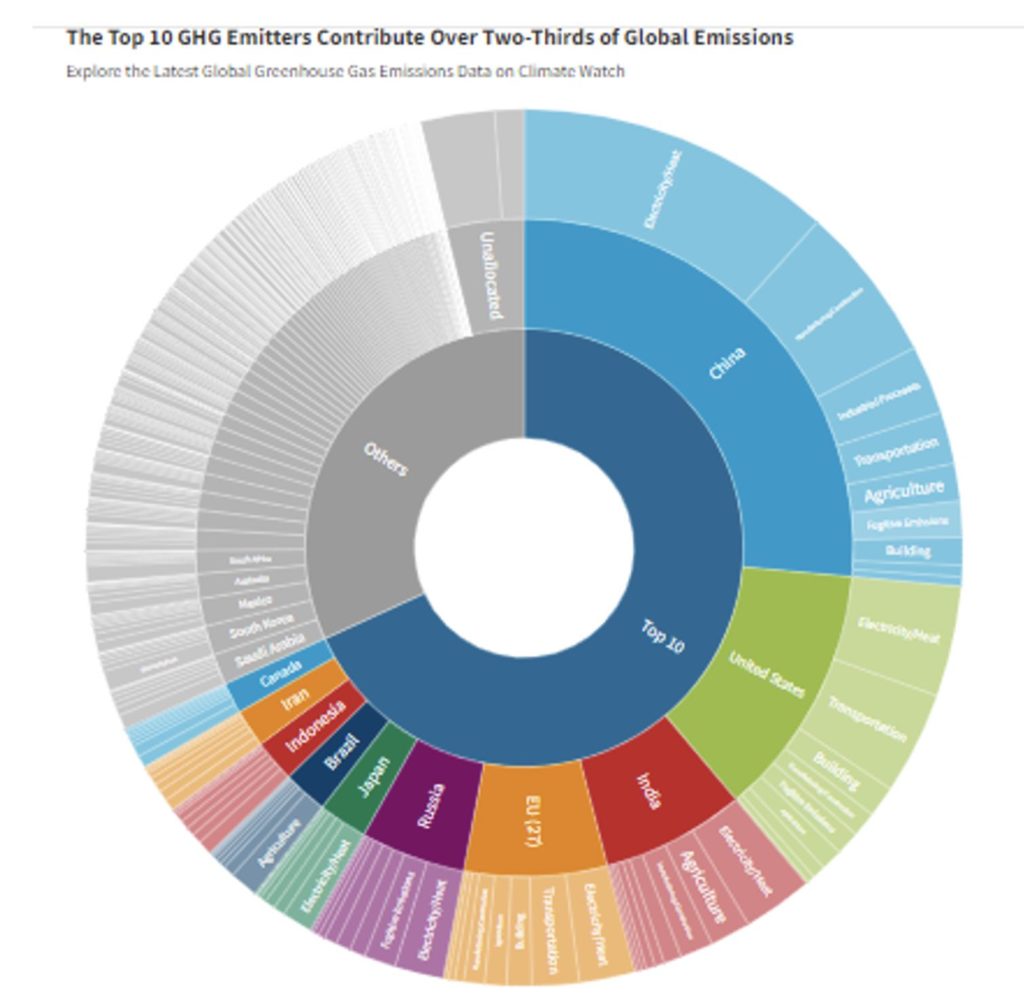 On the other hand, CBAM is regarded as a kind of trade barrier for some countries. Some experts allege that it may trigger retaliatory attempts that can hinder the competitiveness of the EU Companies and harm the harmony in international trade. The economic burden of the strengthened ETS and new requirements in the context of sustainable product initiatives may also harm the competitive advantages of the EU companies by increasing their production costs. According to the World Bank’s annual report related to the carbon pricing trend around the world, policymakers in different countries have difficulty in establishing new carbon regimes due to the volatility in the energy market and high inflation rate. The creation of new carbon clubs necessitates coordination among the countries to harmonize the rules and prices of new emission trading systems. 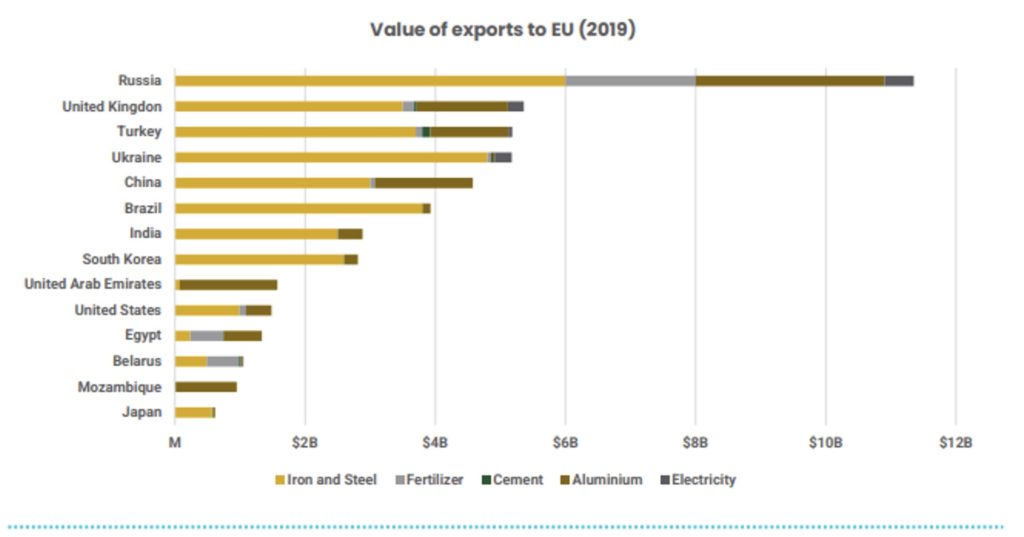 Figure-7: Exports to EU in the Context of CBAM, Source: UNPRI

Terminating the use of fossil fuels as a source of power will also have fundamental impacts on the EU’s relations with oil and gas exporters. After the invasion of Ukraine by Russia, the EU has accelerated its exit strategy from fossil fuels by declaring the REPowerEU plan, which aims to increase the share of renewable energy from 40% to %45. Frans Timmermans paid some visits to countries in the Mediterranean Seas, such as Turkey and Egypt, to seek the possibilities of new partnerships on green hydrogen.

The relationship between Russia and the EU is very complicated in terms of energy dependency and international trade. On the one side, the EU has few alternatives to replace the Russian natural gas in the short-term due to the rising gas demands and difficulty in transferring the gas in the LNG form. On the other hand, the EU’s exit from fossil fuels will definitely have detrimental effects on the Russian economy in the long term. Although Russia can easily find alternative markets for exporting oil and gas in the short-term, the success of the EU Green Deal in encouraging other countries (known as the “Brussels effect”) to decarbonize their economies may shake the Russian economy’s strength. 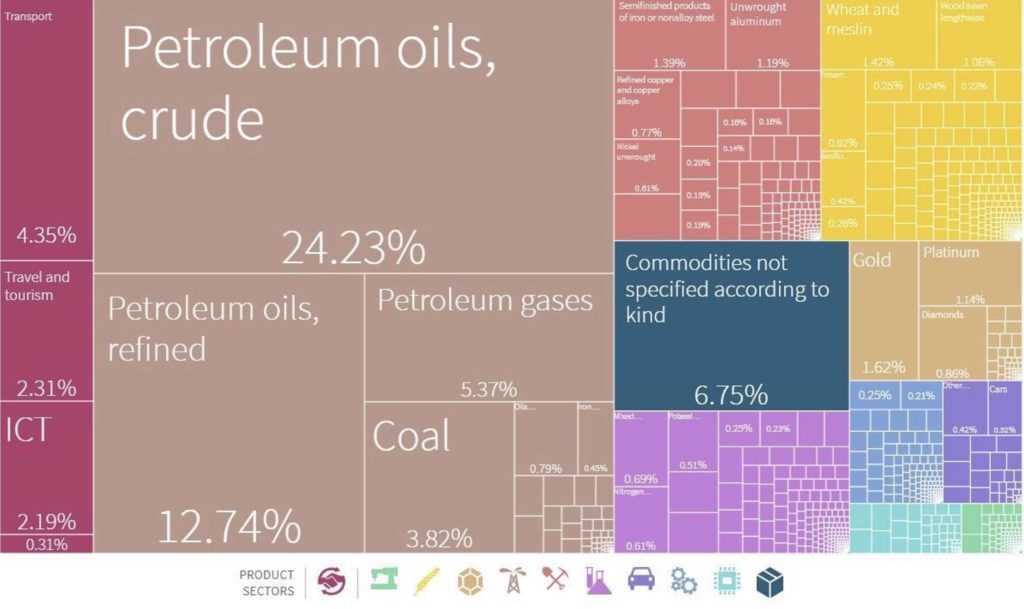 The EU Green Deal seems to create new dependencies on raw materials widely used in renewable energy systems. The EU predominantly imports 19 critical metals from China. The growing critical metal demands for developing clean technologies can become a new Achilles’ heel for the EU. It is estimated that the lithium demand in the EU will increase 18 times by 2030. The EU’s new kind of critical metal dependency on China may create another vulnerability for foreign and security policies of the EU 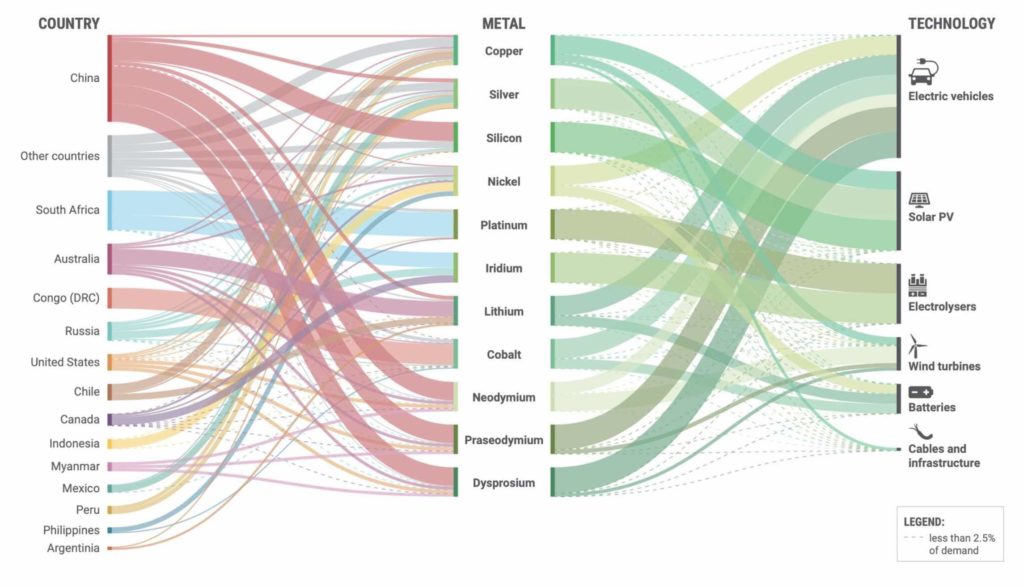 New environmental legal regulations under the EU Green Deal will initiate a wave of green regulations in other regions to increase the compatibility of the regional companies with the emergence of new sustainable markets in the world. From this point of view, the EU Green Deal can be regarded as an effective international policy instrument to build a world order which is compatible with the sustainable development goals of the United Nations. In this context;