GNA Point of View on the Ongoing Crisis in Libya 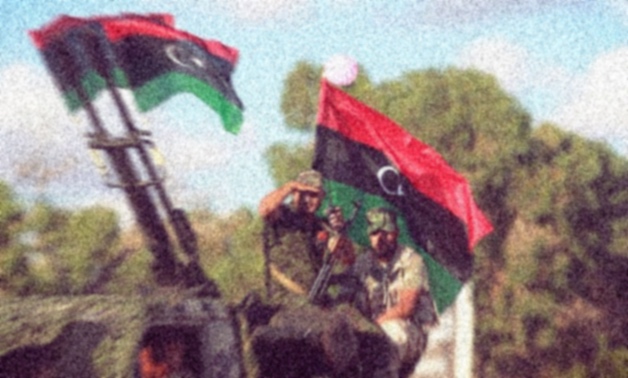 While the armed conflict in and around capital Tripoli escalate to a full-blown civil war destroying the physical and social infrastructure of Libya and making a democratic and peaceful Libya a more elusive vision, Beyond the Horizon ISSG had a chance to take a closer look into the ongoing crisis together with the Ambassador of Libya to EU, Belgium and Luxemburg, Mr Nureddin Mazen. As Mr.Mazen represents internationally recognised Government of National Accord (GNA), our questions and the assessment thereof will be focused on GNA’s perspective.

As a short backgrounder, since the fall of Qaddafi from power almost eight years ago, Libya hasn’t been able to effectively implement an all-inclusive national reconciliation process to attain lasting domestic peace and stability. Most lately in December 2015, to end conflicts, restructure Libyan institutions and transition to a fully functioning democratic governance, Libyan Political Agreement was signed in Skhirat/Morocco —under the auspices of UN— which foresaw the formation of a government of national accord. Based on the Skhirat Agreement, UN-backed and internationally recognised Government of National Accord (GNA) was established in the aftermath, and it has been in charge in Tripoli for more than three years.

Up to now, due to various reasons, GNA has not been able to unify Libya or assert its authority on most of the country. People living in GNA controlled areas have been suffering from lack of essential government/public services such as health, electricity, water, sanitation and education, in the Western and Southern Libya —The GNA can be said to be responsible for Southern Libya until February 2019, the date when Haftar took control over the area.  There is a similar picture in LNA controlled Eastern Libya. But we will not go into detail as this does not fall under the focus area of this article.

Additionally, militias’ dominance on government and financial institutions haven’t been fully broken by GNA. For example, last summer, there was conflict among militias due to competition on controlling government power and financial means in Tripoli. According to Mazen, GNA spends every effort to achieve stability; however, the political process initiated by GNA to integrate militias in governmental security organs is continuously undermined by Tobruk based House of Representatives (HoR) and their regional backers. “HoR was seeking all the time to pre-empt any positive measure undertaken by the GNA, to make it fail” together with some external parties backing militias preventing measures taken by GNA, says Mr Mazen.

The MPs of Libyan HoR has essential disagreements over the crisis in the country. However, after LNA’s Tripoli offensive, those disagreements seem to have deepened. Boycotting the HoR sessions in Tobruk chaired by Aquila Saleh, some 60 MPs has started holding parliamentary meetings in Tripoli since May 2019 and elected a new chair, Sadiq al-Kahili. Mazen suggests those disagreements have been a root cause that ultimately led to the outbreak of the Tripoli war. He makes the point that GNA still has contact with the majority of the MPs, including the boycotting ones.

The incentives of Khalifa Haftar’s unexpected offensive to Tripoli just a couple of days before the UN-sponsored National Conference has been discussed for a long while. Mazen slams Haftar’s rhetoric of fighting terrorists in Tripoli. He highlights that there are no terrorists in Tripoli; terrorists in Libya were defeated in the city of Sirte by the forces of Bunian Marsous and its allies, which are defending Tripoli today against Haftar’s Libyan National Army (LNA) forces. “Haftar’s purpose is to seize power, eradicate democratic options chosen by the Libyan people and to restore a totalitarian autocracy and family rule,” adds Mazen.

Contrary to Haftar’s and his regional/international backer’s expectations, advance to Tripoli turned into a protracted war. With his military strong man characteristics, Haftar is not likely to accept a retreat. On the other side, Serraj and his allies feel betrayed and have no trust towards Haftar, precluding a probable negotiation between the parties. In this stalemate, Mazen indicates the new political peace process that Serraj is trying to initiate by leaving Haftar out, as a way out from the crisis.

Despite UN arms embargo, there are strong indications of arms and military equipment transfers stemming from international partners of the fighting groups. Without acknowledging such external support, Mazen argues that forces allied with GNA could repel the LNA offensive with its own means. He also refuses the alleged hesitations of heartedly fighting of some militia groups and distrust leading to avoiding consuming their arsenal. “These are rumours spread by the aggressor to destabilise GNA forces” he claims.

Up to now, having a single authority for selling Libyan oil has saved Libya from being scattered to small pieces. With the possible escalation of the Tripoli War, it is highly likely that Haftar, running out of all options, will try to sell Libyan oil bypassing NOC. The Ambassador thinks that the US and other international actors will prevent Haftar’s such attempts, as they did last year.

Among international actors, there are a lot of speculations on Russia’s Libya policy. A couple of weeks ago, amid the military stalemate in Tripoli, Haftar once again visited Moscow and spoke to Putin. As a member of the UN Security Council, Russia recognises GNA as the legitimate representative of Libyan people and officially declares equal distance to all factions in Libya. Additionally, it maintains excellent connections with the son of Muammar Gaddafi, Saif-ul Islam Qadhafi. Mr.Mazen thinks that onwards the new fighting in April 2019, Russia adopted a more pro-Haftar policy. “Since the outbreak of war on Tripoli, Russia took many positions supporting Khalifa Haftar forces implicitly, the latest was its opposition to Security Council resolution calling Haftar’s forces to stop advancing on Tripoli, on 7 April,” says he. By the way, two other UN Security Council (UNSC) members; US and France have no clear stance as well. Amid Haftar’s Tripoli offensive, Trumps endorsing phone call to him; French special forces and weapons discovered in Libya; and both country’s ambiguous attitude in UNSC is confusing for the international community. Put it differently, the US and France are still confused about Libya matters.

Like Russia, some spectators pronounce Saif-ul Islam Qadhafi’s name as a personality that Libyans could agree on to solve the crisis in the country. While for some governing figures in Tripoli names from Qadhafi cross a redline, Mr Mazen leaves the door open to him and suggests that any person willing to reach power should be chosen through the electoral process and ballot boxes.

Due to terrorism, migration and humanitarian-related concerns and due to its abundant oil reserves, the crisis in Libya attracts a great deal of attention from external actors.

Due to terrorism, migration and humanitarian-related concerns and due to its abundant oil reserves, the crisis in Libya attracts a great deal of attention from external actors. It is known that warring parties has international and regional backers, providing military and financial support. Up to now, such individual interventions was one of the main factors of protracted conflict and deepened woe of Libyan people. A unified international approach is crucial for urging conflicting internal actors to sit around a table and reach a compromise. Mr Mazen expects the international community to, immediately, stop the war on Tripoli, promote the return to the political solution, support Mr.Serraj’s initiative to solve the crisis and deter the interventions of regional actors. On the other hand, as an ambassador, he thinks that EU plays its expected role by supporting the GNA as the legitimate government of Libya, repeatedly calling to stop the war on Tripoli and promoting the peaceful solution in Libya.

When it comes to the way ahead for Libya, Mr Mazen has an optimistic view on lowering of the tension and bringing the stability and prosperity back to Libya. He argues that Libyan communities are homogenous, sharing the same language, religion, language, customs and social norms; and “it is easy to reconcile the different communities if there is a will from Libyans themselves.” Even though the happenings in Libya in the last eight years suggests different dynamics, one must share his optimistic view.