Does US Really Want to Withdraw from the Intermediate-Range Nuclear Forces (INF) Treaty? 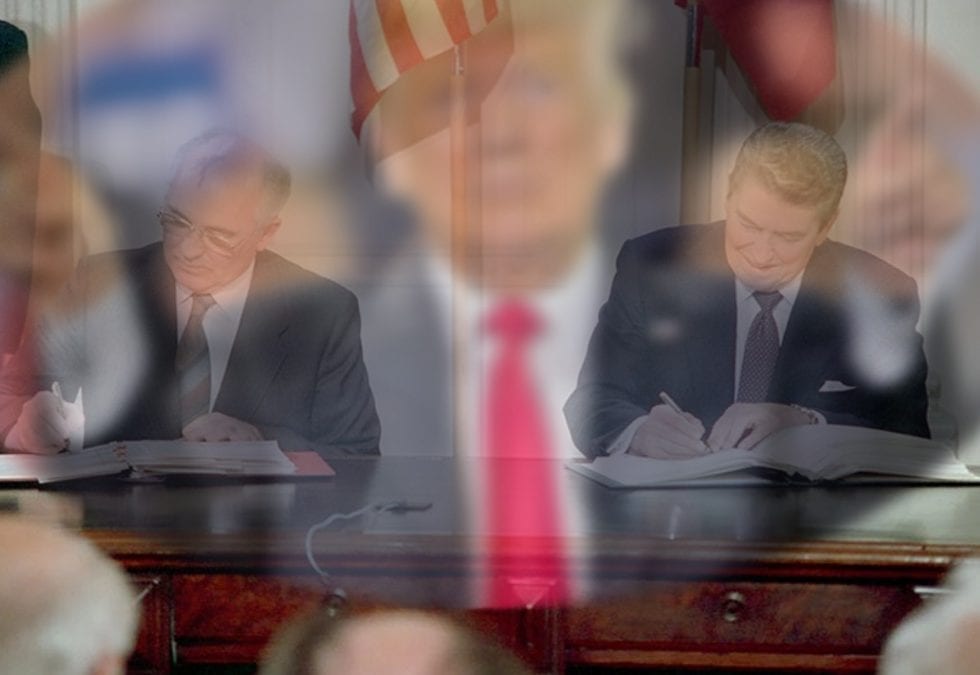 We have been witnessing baffling developments in the last month, which corroborate our earlier observations on deteriorating liberal world order. On 20 October 2018, President Donald Trump stated his intention to pull U.S. out of INF Treaty and build up its arsenal “until people come to their senses” in a move to put pressure on Russia and China. Russian answer came from Konstantin Kosachev, head of the foreign affairs committee in the upper house of the Russian parliament, who threatened to reciprocate, if U.S. starts deploying intermediate-range nuclear weapons in Europe. Threatening to further target those weapons systems, he added: “We are actively working with all those who are ready to work with Russia to raise the pressure on the U.S. in order to preserve the treaty.”

Being the only arms control agreement in force since signature in 1987, INF prohibits possessing, producing or test-flying nuclear and conventional ground-launched ballistic and cruise missiles within ranges of 500 to 5,500 kilometers. Historically, INF agreement has its roots in the Euromissile crisis of the mid-1970s where the Soviet Union had deployed then newly-developed SS-20 intermediate-range missiles aimed at Europe. The move brought a shockwave as U.S. had no ballistic missiles with comparable range. Since short-range U.S. missiles deployed in Europe could not reach Soviet soil, in the case of an attack to Europe through SS-20, U.S. would be forced to retaliate with longer range ballistic missiles. The U.S. and NATO allies developed a “dual-track” policy of deploying intermediate-range ground-launched cruise and Pershing II ballistic missiles into Europe, while simultaneously seeking an arms control agreement with the Soviets. After a series of interrupted negotiations, INF Treaty was signed on 8 December 1987 and took effect on 1 June 1988.

However, to better understand the U.S. reaction, we need to look closer into more recent developments.

INF Treaty was regarded as an arms control success. However, first alleged violations of INF Treaty came in July 2014 when the U.S. Department of State claimed that Russia violated its obligation not to “possess, produce, or flight-test” missiles prohibited by the treaty, although no details were provided regarding nature of the alleged violation. Russia responded in August by refusing the alleged violations. Unsatisfied with these explanations, U.S. State Department repeated these allegations in 2015, 2016, and 2017. On December 8, 2017, U.S. State Department gave more specific data about the violation. Accordingly, an extended-range version of the Iskander -with Russian designation 9M729- was the source of violation.

According to U.S. military, Russia’s alleged violations of the INF Treaty place allied forces in jeopardy. General Curtis M. Scaparrotti, NATO’s supreme allied commander,added that “Russia’s fielding of a conventional/nuclear dual-capable system that is prohibited under the INF Treaty creates a mismatch in escalatory options with the West.”

In the latest NATO Summit held on 11-12 July 2018 in Brussels, Russian non-compliance with the INF Treaty was described in Summit Declaration as:

“The Intermediate-Range Nuclear Forces (INF) Treaty has been crucial to Euro-Atlantic security and we remain fully committed to the preservation of this landmark arms control treaty. Full compliance with the INF Treaty is essential. The United States is in compliance with its obligations under the INF Treaty and continues to provide substantial transparency on its programs while pursuing a diplomatic dialogue with Russia. At the same time, Allies have identified a Russian missile system, the 9M729, which raises serious concerns. After years of denials and obfuscation, and despite Allies repeatedly raising their concerns, the Russian Federation only recently acknowledged the existence of the missile system without providing the necessary transparency or explanation. A pattern of behavior and information over many years has led to widespread doubts about Russian compliance. Allies believe that, in the absence of any credible answer from Russia on this new missile, the most plausible assessment would be that Russia is in violation of the Treaty. NATO urges Russia to address these concerns in a substantial and transparent way, and actively engage in a technical dialogue with the United States. Allies will continue their efforts to engage Russia on this issue in bilateral and multilateral formats.”

Russia’s alleged development of a weapon that breaks the treaty was on the agenda of NATO defense ministers at their latest gathering on 3–4 October 2018 in Brussels. The U.S. side as well as the NATO Secretary General raised the issue. Allies agreed that Russia has not been transparent. They also assessed that Russia was in violation of the INF Treaty, as delivered by the NATO Secretary General.

It was with this backstory that President Donald Trump’s famous threat came about secession from the historic agreement, on 20 October 2018, two weeks after the NATO ministerial.

In a speech hosted by the German Atlantic Society and the Federal Academy for Security Policy in Berlin, NATO Secretary General underscored the importance of the transatlantic bond at a time of unprecedented security challenges. In particular, he warned that the deployment of new Russian SSC-8 missiles would put the historic INF Treaty at jeopardy and had called on Russia to ensure full compliance with the treaty. Then on 20 November 2018, ahead of a meeting with the EU Foreign Affairs Council, he stated he would also discuss the INF Treaty with EU ministers, saying: “We should all call on Russia to ensure full and transparent compliance with the INF Treaty because we don’t want a new arms race and the INF Treaty has been important for our security for decades”.

So, what now? How should we interpret all those events?

If the INF Treaty dissolves, the effects will go far beyond. The collapse of the agreement is likely to promote new missile defense mechanisms in Europe and Asia over time. Current NATO missile interceptors in Poland, Romania and Turkey are designed primarily for defense against missiles emanating from the adversaries in the southern flank. However, growing concerns about new Russian missiles may lead NATO to reconsider its missile defense architecture over the eastern flank.