Could Brazil be a NATO member with president Trump’s support? 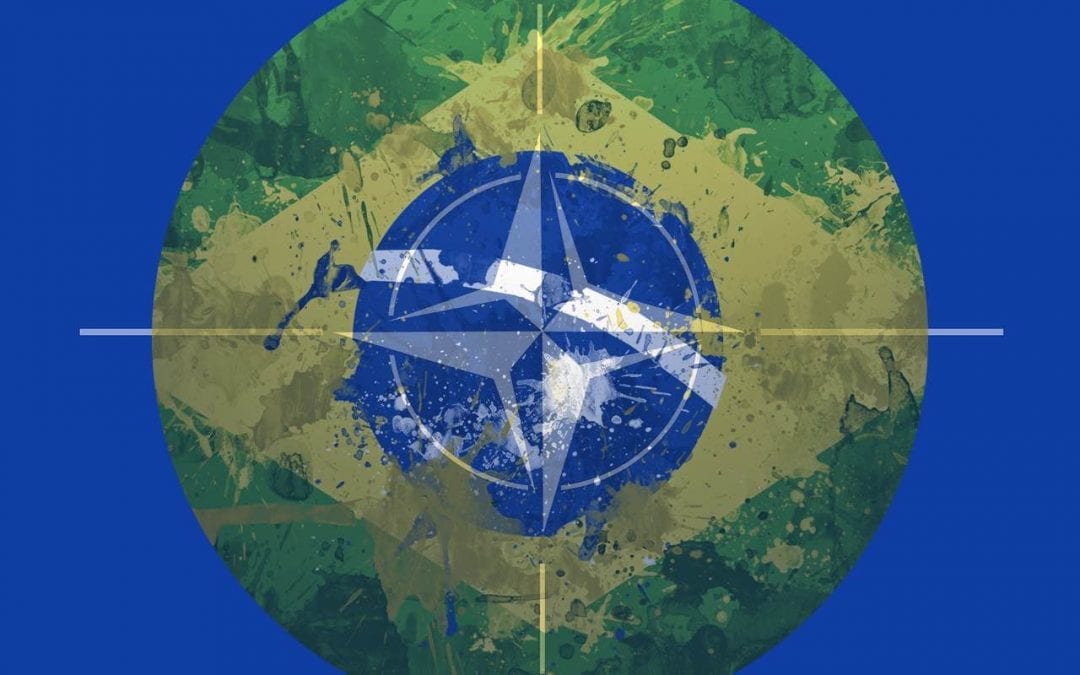 Brazilian President Jair Bolsonaro and US President Donald Trump’s message at the White House during the press conference on March 19 attracted international attention. Particularly in the areas of terrorism, drug and human trafficking, cybercrime and money laundering, the two presidents agreed to increase the current level of co-operation determined in the US-Brazilian Security Forum. At the press conference, Trump stated that Brazil could be granted Major Non-NATO Ally (MNNA) and even NATO membership. He ignited a new debate in transatlantic relations. However, at the press conference, the main issue of Trump was to give MNA status to Brazil.

The US has so far given MNNA status to 17 countries.

Initially, to be able to analyze the subject, the difference between MNNA and NATO membership has to be understood.

Major non-NATO ally (MNNA) is a designation given by the United States government to close allies that have strategic working relationships with the US Armed Forces but are not members of the North Atlantic Treaty Organization (NATO).

The status which was initially given to in 1987, Israel, Egypt, Japan, Australia, and the Republic of Korea aimed to have a country preferential access to the purchase of US military equipment and technology, including free surplus material, expedited export processing and prioritized cooperation on training. Currently 17 countries have been given MNNA status including Pakistan and Afghanistan.

Membership in NATO is a process that begins with the official invitation letter sent by the member states as a result of the decision of the membership of a new country and ends with the signing of the Accession Protocol.

Under the NATO Treaty, only European states can be invited to NATO.

According to the NATO Treaty of 1949, the Alliance was established to ensure security in the North Atlantic Region. Therefore, the idea of ​​including Brazil in the alliance is at first glance perceived as a contradictory situation. According to the Article 10 of The North Atlantic Treaty, the Parties may, by unanimous agreement, invite any other European State in a position to further the principles of this Treaty and to contribute to the security of the North Atlantic area to accede to this Treaty. This article only regulates the accession of European states to the alliance. Although it is crystal clear in the treaty, the fact that President Trump raised up the idea of Brazil’s membership to NATO before meeting with other NATO countries is in contradiction with the alliance’s membership procedures.

According to NATO Strategic Concept-2010, which is considered as the main source of reference in the enlargement policy of the Alliance, NATO has adopted a policy of establishing partnerships on a global scale with countries that adopt democratic values ​​and that can contribute to the security of the North-Atlantic region.

On the basis of these principles, alliance member countries with historical ties with South American countries such as Spain and Portugal have supported the partnership between Brazil and NATO in the context of global cooperation due to developing economic & military capacity and low threat perception of Brazil.

However, Brazil wants to be part of a group of countries that have permanent veto power with a serious reform in the UN organisation rather than operating under the umbrella of a NATO-like organisation in terms of foreign policy. Brazil is the 9th largest economy in the world and constitutes 47% of the South American GDP. Brazil, at the same time, is the member of the BRICS community which aims to offer a different alternative to the international order created by the western states after the Second World War.

In addition to cooperation with the United States in many areas, the US-Brazilian relations are also strained from time to time due to the restriction of maritime jurisdictions and attempts to limit US sovereignty in South America.

Brazil has not been a party to the use of military force in international conflict areas. Independence, self-determination, non-intervention and territorial integrity are the basic values ​​of Brazil’s foreign policy. The Initiative Against the Spread of Weapons of Mass Destruction, launched in 2003 by the US, has been criticised by countries such as Brazil, China and India for its alleged discrimination. On the other hand, in 2011, Brazil voted the abstention from the UN Security Council resolution 1973 against Libya with Russia, China, Germany and India and argued that NATO’s possible military intervention in Libya would be excluded from the responsibility of “protecting civilians”.

Brazil did not respond to NATO’s demand for Afghanistan.

According to Former Supreme Allied Commander Europe, James Stavridis, Trump’s suggestion of making Brazil an actual NATO ally makes little sense. Stavridis says that NATO approached Brazil for troops to deploy to Afghanistan, and they resoundingly rejected the idea, even though Colombia, El Salvador and other Latin American nations did cooperate. And he believes that it is highly unlikely that the other NATO nations would effectively blow up the treaty to make a country outside the North Atlantic a full member and if the alliance were even to contemplate such a notion, Australia and New Zealand would be far ahead of Brazil.

The right-wing government of Bolsonaro sees the Venezuela Crisis as an opportunity for integration with the West.

Brazil’s politically right-wing new administration wants to consider recent events in Venezuela as an opportunity to deepen its relations with the West and thereby establish a liberal and democratic order in South America. In an interview with Brazilian Foreign Minister Ernesto Araujo, he said that despite some differences, Brazil is culturally involved in the Western World and therefore Brasil wanted to establish closer relations with the two important international organisations, NATO and the OECD, that shape the world’s military and economic policies. In the same interview, he added that the West needed a north-south axis.

As a result, it is possible for United States to enhance defense relations with a developing Brazil in military and economic areas and to give MNNA to Brazil due to a right-wing administration and overlapping interests in the Venezuelan conflict. However, in the future of this relationship to be established in the defense field, Brazil’s membership in BRICS, its traditional anti-military attitude in the international arena, and the level of cooperation in South America will be effective. Brazil’s membership in NATO is not possible at this stage, since it is outside the framework of the 1949 NATO Treaty, the geographies where the defense strategies focus are different and there is no general tendency among NATO members.

*Alexy Zender is Maritime Security Analyst at Beyond the Horizon ISSG