Can Russian submarines pass through the Turkish Straits according to the Montreux Convention? 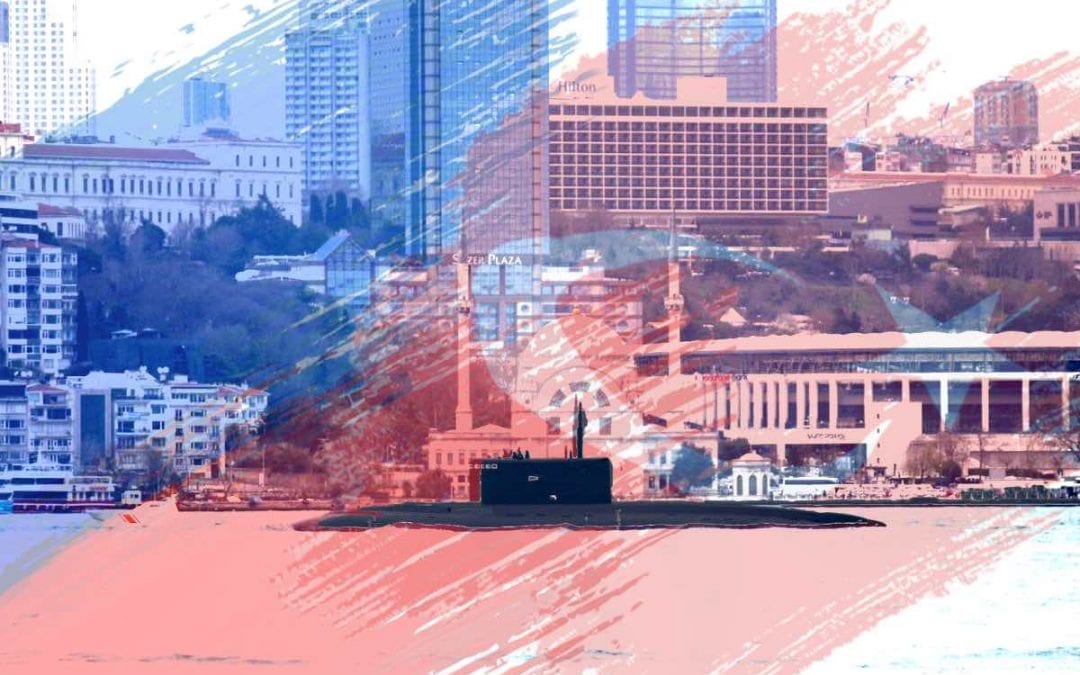 According to Montreux Convention, Black Sea littoral states have the right to use the Turkish Straits if the submarines have been constructed, purchased or sent for repair outside Black Sea with the stipulation that they inform Turkey in advance. In the case of submarines, they should not be submerged and should sail in daytime and in solitary.

During the period of the Cold War, the submarines in the Soviet Black Sea Fleet did not use the straits for passage. In 2011, Russian submarine RFS B-871 Alrosa made the first passage after 1991. The submarine passed through the straits and sailed to St. Petersburg for repairs and returned to its main port in September 2012.

In 2017, the Russian Federation completed the deployment of 6 diesel-electric submarines, 4 of which were at Sevastopol-Black Sea and 2 of them were at Tartus-Eastern Mediterranean. Notably, the maintenance and repair activities of the Velikiy Novgorod and Kolpino submarines which were deployed in the Eastern Mediterranean came into question, and three options were discussed. The options considered were; the pooling of submarines in Southern Cyprus or Egypt, transferring them to St. Petersburg for repair, or gaining a floating dry-dock capability at the Tartus base.

Discussions on the amendments to the Montreux Convention

As debates continued, the frequent stay of ships belonging to NATO Permanent Naval Task Group and the U.S. Navy due to recent crisis in Ukraine and provisions of the Montreux Convention allowing this as long as 21 days further generated another wave of discussions. The discussion among Russian authorities centered more on understanding repercussions of a probable change in the provisions of the Convention. The conclusion was that changing the Montreux Convention could be against Russia. Instead, it was agreed that the continuation of the status quo giving to Turkey that would interpret circumstances in favor of Russia would be the most appropriate course of action.

In fact, some decisions taken by Turkey related with the passages of warships through straits and the article 24 of Montreux convention have arguments which support Russian course of action. According to the article 24, Turkey has obliged to collect statistical data and control the implementation of passage rules of warships. Turkey has right to respond to the pre-declarations for passage according to Montreux Convention.

In which events did Turkey use the right to interpret events in favour of Russia?

Turkey has used the right to interpret the terms of contract and oversee the passage of military ships in favor of Russia several times politically in the past. The first of these is the permission to pass the aircraft carrier KIEV in 1976. According to the Montreux Convention, it is forbidden for aircraft carriers to use the straits. In the preliminary notice, the USSR had designated the KIEV ship as an anti-submarine cruiser. Since the ship is classified as an aircraft carrier according to NATO definitions, the NATO General Assembly made call to Turkey not to let the passage of the vessel. However, the Turkish government allowed it by a political decision, based on the declaration of the flag state and its implicit discretion.

The second event was to allow the passage of the Admiral Kuznetsov aircraft carrier in 1981. For this passage, the USSR stated the KUZNETSOV ship as a heavy combat cruiser carrying aircraft in the preliminary notice. Turkey allowed the passage of this ship on similar reasoning. However, it is noteworthy that in both passages although the representatives of the Contracting States in Ankara were also informed, they have not made any attempt to indicate that the passages are not in accordance with the Convention nor should be prevented.

Passage of submarines does not comply with the contract

The former two were in the Eastern Mediterranean since 2017 and their repair time was due. These passages were not in accordance with Article 12 of the Montreux Convention regulating the transfer of submarines.

As it is understood from the previous discussions, there is no information about the purchase of a floating dry-dock for the pooling of submarines in the Tartus base. Therefore, it is not the case that the submarines from the Black Sea are repaired in Tartus. Krasnodar and Stary Oskol submarines that came to the Eastern Mediterranean will also serve until the due date of repair and will be transferred to Petersburg.

Probably the Russians have made the preliminary statement for the passage of Velikiy Novgorod and Kolpino submarines which are in the eastern Mediterranean since 2017 as the first time to transfer them to the Sevastopol base. In the end, as they said after the passage of Admiral Gorshkov’s KUZNETSOV aircraft carrier, the Russians implemented the convention with some interpretation, passed their submarines through the straits and changed their submarines with rotation for 2.5 years in military terms.

Objections about the passages by Ukraine

Turkey, as a natural result of the recent political rapprochement with Russia, has allowed the passage based on the declaration by the flag state. However, unlike previous passages, this time Ukraine has stated that submarine crossings are contrary to Montreux. It is understood that this attempt was to record the dissent diplomatically, to use it as a benchmark for a probable similar case in Russian-Ukrainian crisis, when NATO or U.S. ships would be transferred to the region to exceed the time and tonnage restrictions.

Yet, during the crisis in Georgia in 2008, Turkey did not allow the passage of two hospital ships “USN Comfort” and “USN Mercy” carrying humanitarian aid with the total tonnage of 140 thousand tons due to tonnage restrictions in the convention for eliminating a possible crisis that may arise with Russia.

After the annexation of the Crimea, the Russian Federation used its modern naval power created at the base of Sevastopol to change the geopolitical and geo-economic balance in the Black Sea and the Eastern Mediterranean.

Montreux Convention Regarding the Regime of the Straits, while arranging passage through the Straits, also contains the issues to resolve the security concerns of the Black Sea riparian countries. A condition of interpreting events in favor of Russia may from time to time be against the interests of Turkey in particular. Nobody can guarantee that good relations between Turkey and Russia today, will not be disrupted tomorrow. As Russian Chief of General Staff Gerasimov said, “Turkey is no longer the dominant naval power in the Black Sea. The main principle in the military strategy is to take every possibility into account.”

Montreux Convention Regarding the Regime of the Straits is the most important legal text to be protected after the Treaty of Lausanne for Turkey. The permanent task group of Russia in the Eastern Mediterranean consisting of frigates, corvettes and submarines having the ability to attack ashore, Tartus naval base and Russia’s base acquisition activities in South Cyprus do not favor Turkey’s interests in the region in the medium-long term. The concessions given in order to overcome political congestion experienced on the Syria and S-400 issues can be used against Turkey as a precedent for future in a legal sense and may cause to irreparable errors. Especially if this period coincides with the discussion of the Montreux Convention in the U.S., more attention and solicitude is to be exercised.

*Maritime Security Analyst at Beyond the Horizon ISSG