by Onur Sultan* | May 1, 2019 | Commentary, Terrorism and Counterterrorism, Terrorism, Conflict and War 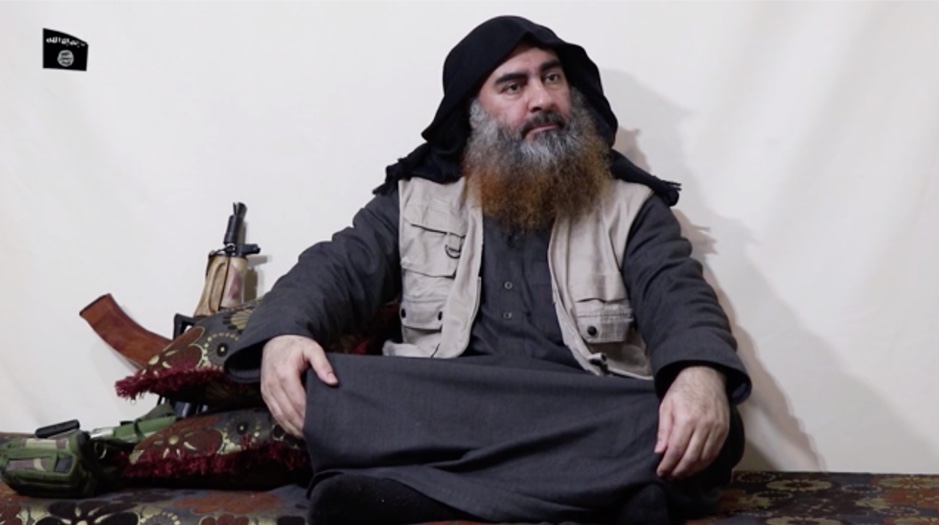 On 29 April 2019, al-Furqan Media Center of Daesh posted a 18.22 minute video with the name: “In the  Hospitality of the Emir of the Believers”. The timing of the video message, the medium it was posted through and its content are all extremely important.

Following exact order, the video came at a time where the insurgent group was defeated in its last piece of territory (Baghuz) on March 23 and some 63.000 women and children (to include 12.000 foreigners) were taken to al-Hol detention camp in northeastern Syria and 8.000 fighters (some 1.000 foreigners) were put into SDF prisons.

Especially in the last two months, the international debate about what to do with those fighters and their families, if it would be possible to deradicalize them or integrate them to their original societies have been in many cases countered with videos dotting social media showing Daesh followers in camps in Syria and Lebanon enforcing the same rules in formerly Daesh-ruled territories, from time to time shouting Daesh slogans openly in front of international spectators or even threatening them.

At the same time another fierce debate has been taking place among those within the ranks of Daesh and symphatizers. After total loss of territory, what would become of Daesh, what the operatives and symphatizers were supposed to do, was Baghdadi killed or did the orders they received in the name of Baghdadi were issued by someone using his name were the questions the group members were trying to answer.

But, even more important than those questions, as former Al-Qaida operative and MI-6 spy Aimen Dean last year in one-to-one encounter said, is the black hole, the doubt the events created in the whole rhetoric organization has produced so far. The power of doubt around that Daesh will “settle and expand” encapsulated in the slogan of “baqiyya wa tatamaddad” will hopefully raise other questions regarding its bankrupt ideology. To refresh memories, the caliphate project has been in constant retreat since March 2015 where the organization’s losses started in Tikrit creating the first link in the chain of losses to be repeated Baiji, Sinjar, Ramadi in the following months of the year. As the caliphate crumbled in Iraq and Syria, in Yemen, Egypt and Saudi Arabia also the organization has constant lost ground to its rivals. Hopefully this black hole will swallow other remnants of the ideology in those that feel connected to Daesh, will be a trigger for more questioning on what and why to result in self distancing from the organization.

The last element that the video should be considered with is the recent rumors that Baghdadi was seized by SDF in operations in Baghuz or killed by those around him. Although immideately negated by SDF, the fact that the last time Baghdadi was seen in person was during his Friday sermon in the Grand Mosque of Mosul on 4 July 2014. That’s why simplest rumors gained around his capture or arrest attract much circulation. Lastly, two days ago, al-Khaleej, basing its story to the statement of Iraqi intelligence official claimed him to be hiding in the Abu Rujmayn area in southeast of Palmyra, Syria.

The video was posted by al-Furqan Foundation which has been the first media branch created after the organization rebranded itself as Islamic State of Iraq in 2006. The branch is where official declarations and most important propaganda products has been so far released. The first appearance of Baghdadi in the Friday sermon, his latest audio message in August 2018 as well as burning of Jordanian pilots have all been released by Furqan media.

The video starts with a title branding Baghdadi as the caliph and the emir of the believers and then showing him sitting crosslegged on cushion in a small simple room devoid of decorations. He is seen wearing a black thobe and a beige vest and beside him lays an assault vest full with magazines and standing against the wall is an AKS-74U Kalashnikov rifle, an item often seen in photos of Osama bin Laden and Abu Musab al-Zarqawi. It is highly probable that the selection of this weapon type and the simplicity of the room has been premeditated and arranged to give the impression that Baghdadi is no different than his predecessors and that he is their today version.

Then starts Baghdadi to give his message to his followers by addressing three men sitting beside him, two of them having covers around their heads and all having their faces blurred. His speaks slowly to make his message clear and a detail that might have escaped non-Arabic speaking audience is the tone in his voice which shows proof of a mixture of agony and seriousness, probably to reciprocate the grief of his fighters losing lives in Baghuz.

He starts with saying the conflict in Baghuz is over (1:03)** and frames it as the confrontation of Christians vs. Muslims (1:13). Praising the courage and steadfastness (thabaat) of the fighters he continues praising those leading the group, naming them one by name. (3:30) Then he commemorates Daesh mediamen  to include French brothers Fabien and Jean-Michel Clain who he calls with their kunyas as “Abu Anas” and “Abu Othman”. (4:00) Then he praises members of Legal Board or “Hay’at Shar’iyyah”.(4:14) He continues to his talk by praising all members that contributed to the fight in Boghuz. He repeatedly praises them for persevereance or steadfastness and for not losing even an inch of ground to their opponents until death (6:58). In this part, he finishes saying their brethren will not forget the sacrifice and struggle of them, will take their revenge and that there will be more fights in future.

The second part of the video which starts at 7:12 has been dedicated to give the key message that Daesh is not dead but it is alive and functioning across continents. To give this message, following exerpts have been taken out below from the video:

In the third part, Baghdadi:

In the fourth part, Baghdadi reads a text flowing over a photo showing 8 figures posing in front of Daesh flag all their faces covered except for one figure in the center. This figure, Mohammad Zahran is believed to have led the Easter attack in Sri Lanka which resulted in loss of more than 300 innocent lives. 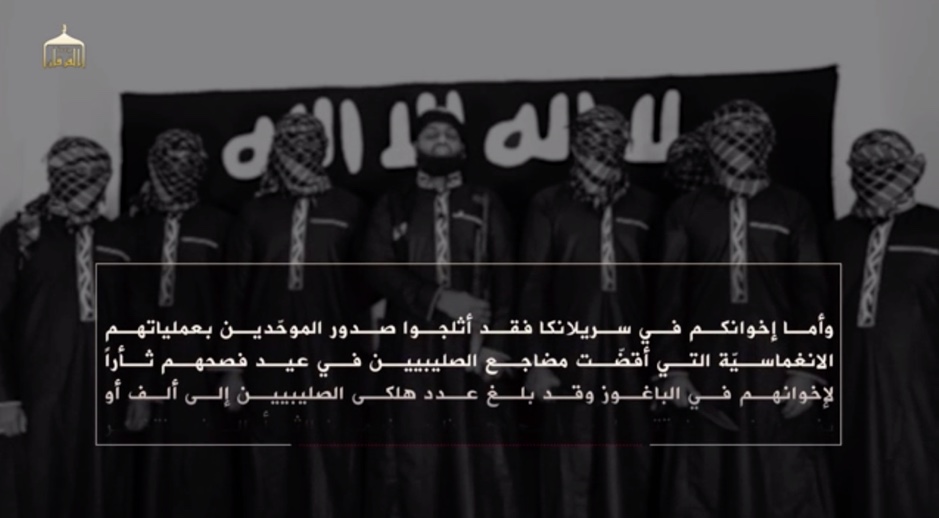 Baghdadi praises perpetrators of the attack and tells it came as a revenge of Baghuz and accepts the allegiance of those Sri Lankan monotheists (muwahhideen) (13:55) He continues to congratulate the fighters in Zulfi, Saudi Arabia and asks their brethren in the country to take revenge from the family of Saluul, a contemporary of the Prophet Mohammad notorious for his treachary and hypocrisy, a name used by Baghdadi instead of al-Saud family as means of disparaging them. (14.54) This comes as a response to arrest of 13 Daesh members after a foiled attack to a state security building in Riyadh on 22 April.

In the last fifth part, a song (nasheed) plays in the background where Baghdadi is seen to be discussing with his deputies the operations in muted tone. (16:16) Then in the rest of the video, his deputy closest to him comes close to him presenting him (appearantly) reports each marked with different cover pages stating respective provinces. After initial illesible one, Baghdadi looks at the cover of reports belonging to alleged provinces of (in order) Iraq, Syria (Sham), Afghanistan (Khorasan), Western Africa, Egypt (Sinai) and Somalia. Then in the file for Yemen he looks into the first page, and then in the respective file for Central Africa he further goes into the file discussing an issue with the presenter. This procedure is repeated for the remaining three files for the Caucusus, Tunisia and Turkey.

If the issues enumerated in the background and general structure of the video are taken into account, it becomes obvious that Baghdadi intends primarily to show that he is alive, in good health and in control of Daesh which he wants to portray as, despite recent setbacks, fully functioning, able to respond to adversaries and growing. In other words, he wants to make his followers believe that the organization is as always in the winning side, be it worldy or heavenly.

Going deeper into analysis, following messages can be said to be existant in the video though with secondary importance.

* Onur Sultan is a research fellow at Beyond the Horizon ISSG and a PhD candidate at the University of Antwerp.

** The timing throughout the text refers to the time where the message is complete. As such, the defined time marks the start of the next theme mentioned in the following text.