China’s Options in the Ukraine War: Bandwagoning with Russia or Being a Real Mediator 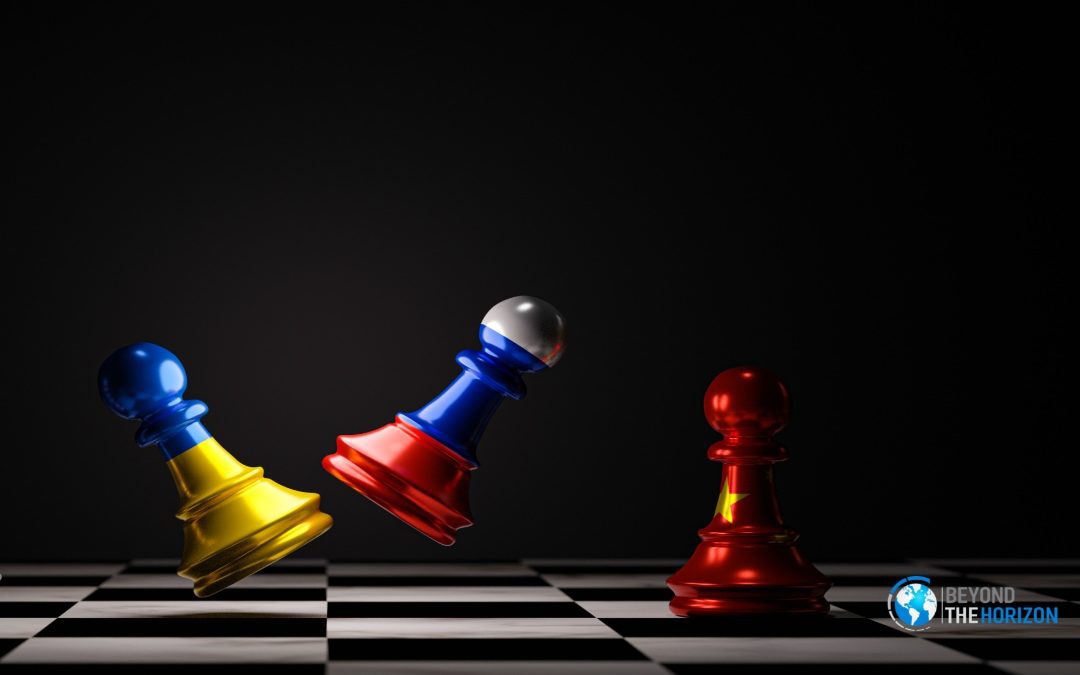 Fukayama described the end of the Cold War as the completion of the ideological evolution of humanity and claimed liberal democracy as humanity’s final form of government. His assertion has not come true. On the contrary, the world has been divided into two camps, namely authoritarian and democratic. Authoritarian regimes such as Russia and China have increased their effectiveness in the global order. According to the Economist Intelligence Unit, 45.7 % of the world population lives under democratic governments as of 2021. Russia’s invasion of Ukraine is the manifestation of the ongoing rivalry between these two camps that turned into an open conflict.  It is arguable that the attitude of China vis-à-vis the war will have a fundamental impact on the trajectory of the relationship between these two camps. 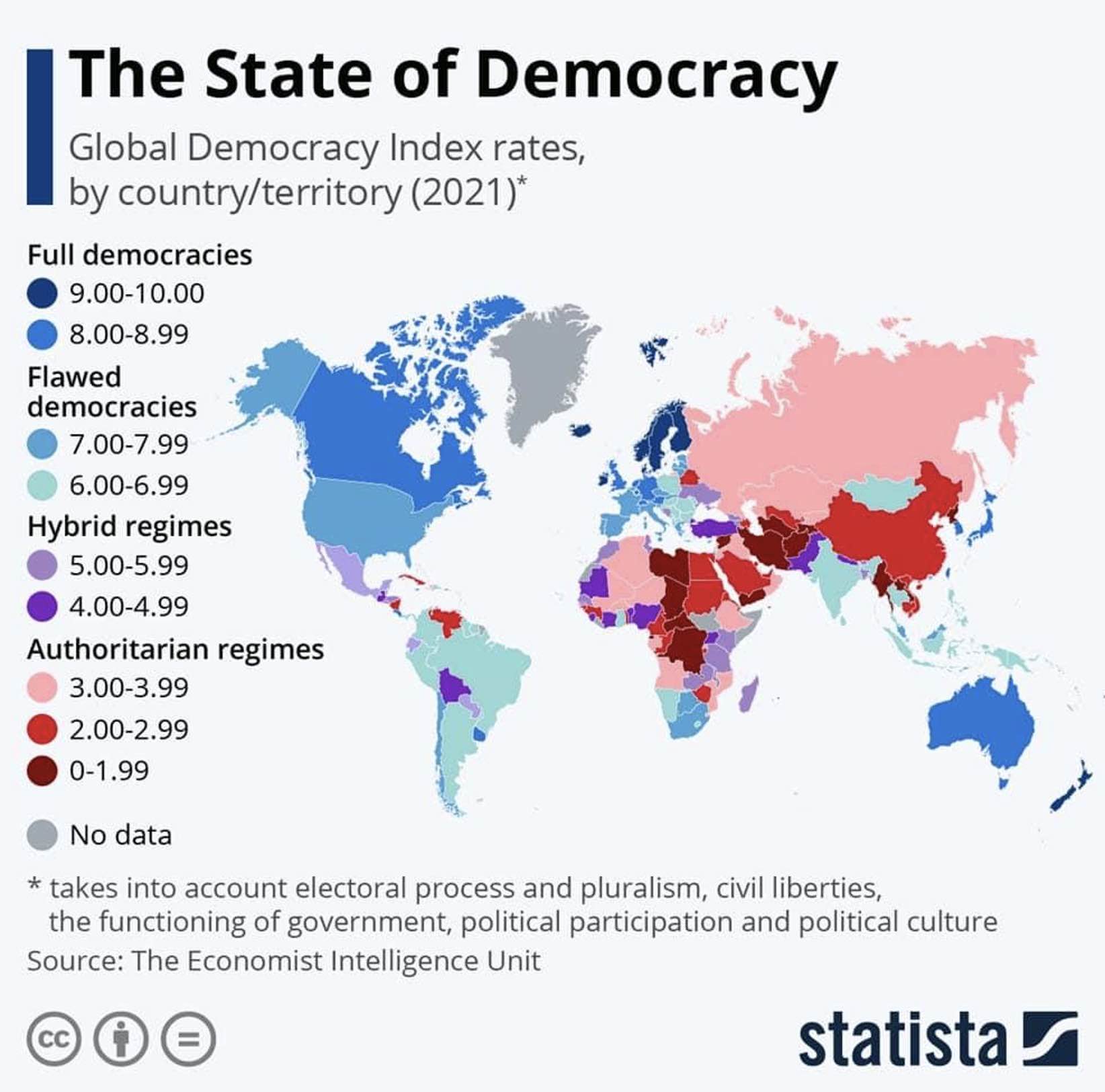 It is rather challenging to put Chinese policy about the invasion of Ukraine in a clear framework. On the one hand, China tries to protect its international image by disapproving of the humanitarian crisis in Ukraine. On the other hand, it continues to use similar discourse to Russia.  Along the same lines, China did not participate in the decision of the UN General Assembly related to the condemnation of Russia. In the initial phase of the crisis, Beijing even criticised the US and NATO for not paying attention to Russia’s “legitimate security concerns,” especially emerging from the expansion of NATO eastward.

Acting on a double-edged sword, China tries to maintain warm ties with Russia, with which it has both ideologically and economically close relationships. It also struggles to alleviate the concerns of the West, which impose considerable sanctions to degrade Russia’s military and financial power. In an interview with CBS, Chinese Ambassador Qin Gang highlighted the position of China as an effective mediator between Ukraine and Russia, and he denied allegations regarding China’s military and financial support to the latter. Describing China as a peace-loving country, Gang pointed out that it is useless to force China to condemn Russia and follow the wave of sanctions due to its negative impacts on the capacity of China to be an effective mediator.

It should be noted here that the perception that the US provoked Russia to invade Ukraine in order to revitalise transatlantic relations, strengthen NATO, and weaken Russia is widespread among Chinese leaders. Chinese experts also see the prolongation of the war in Ukraine as an opportunity to exhaust the economic and military might of the US, the EU and Russia and give way for China to be the new hegemon of the world order.

China’s Relationship with Russia and Ukraine

Western sanctions on Russia have gradually increased in severity and scope after the annexation of Crimea and, in turn, deepened the commercial relationship between Russia and China. According to Comtrade, the rate of China’s share in the exports of Russia increased from %8 in 2014 to %15 in 2020. As of January 2022, China’s total share in Russia’s trade reached the level of %19. The ability of Moscow to access its $640 billion foreign exchange and gold reserves has been crippled after its latest invasion. Russia, therefore, needs access to the Chinese markets to minimise the catastrophic impacts of the massive sanctions imposed by the US and EU on its military power and economic capacity to pay its debts.

There is a significant trade imbalance between China and Russia. Despite the importance of the Chinese market for Russian exports, the ratio of Chinese exports to Russia is not substantial. Russia is not even among the top ten trade partners of China. 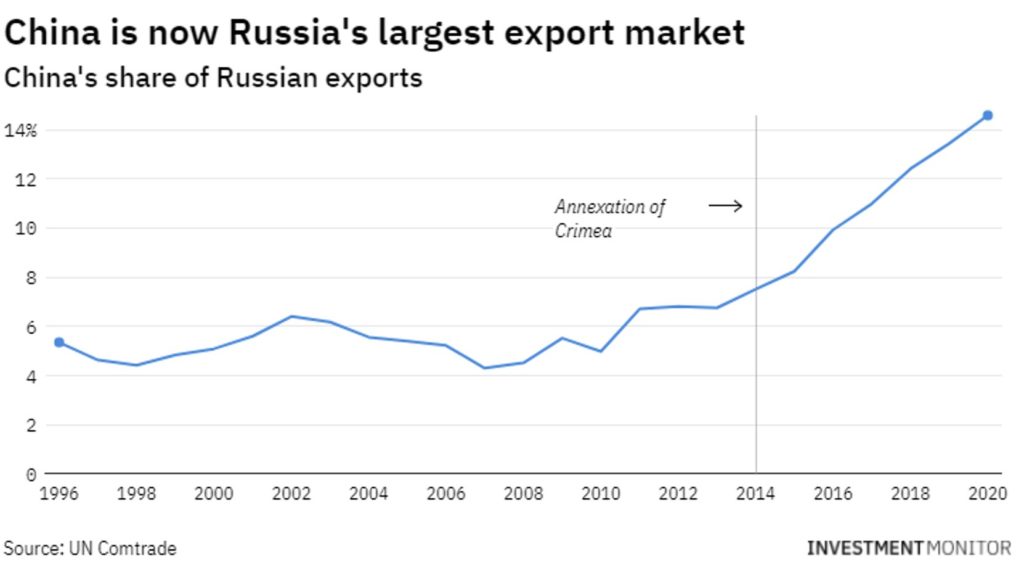 The extent of the relationship between Ukraine and China is surprising. In 2019, China overtook Russia to become Ukraine’s largest trading partner. The free trade agreement between Ukraine and the EU makes Ukraine an attractive market for China. Ukraine provides a playing field to access Europe that shows hesitancy in trade with the country. Moreover, Ukraine is the third biggest arms supplier to China after Russia and France, thanks to China’s purchase of its aircraft carrier, Liaoning, from Ukraine.

The Dependence of China on the Transatlantic Financial System

Possessing strategic hydrocarbon reserves, Russia has the ability to slow down the performance of European economies, which are heavily dependent on Russian oil and gas. Beijing, however, cannot enjoy such a strategic political weapon to minimise the catastrophic impacts of possible Western sanctions since the Chinese economy is mainly dependent on the imported goods from Western economies instead of Russia. In more concrete terms, the imports of China from the EU and US during the first two months of 2022 amounted to $45.8 billion and $31.8 billion, respectively. 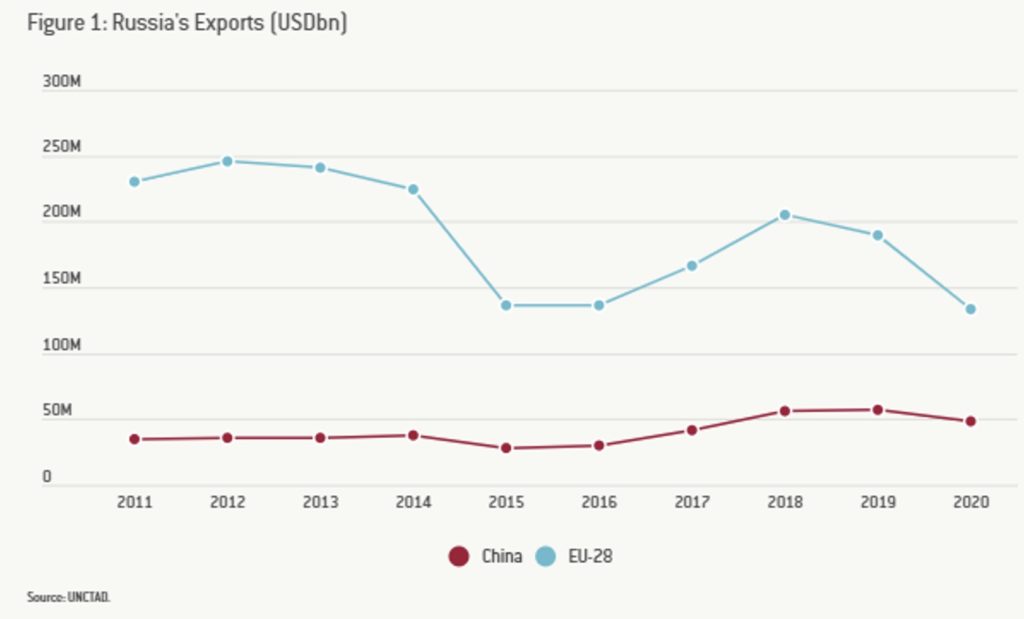 China’s economy has been suffering from a sharp slowdown in recent years. The International Monetary Fund decreased its growth estimate for China to %4.8, which was %7.9 in 2021.  The invasion of Ukraine by Russia has created price volatility in energy, mining, and food markets that may deepen this deterioration. If we discount India and Taiwan, the major trade partners of China are the US, Germany, the Netherlands, and the UK, all of which are transatlantic Allies. Possible economic sanctions would accelerate the speed of economic slowdown in China. 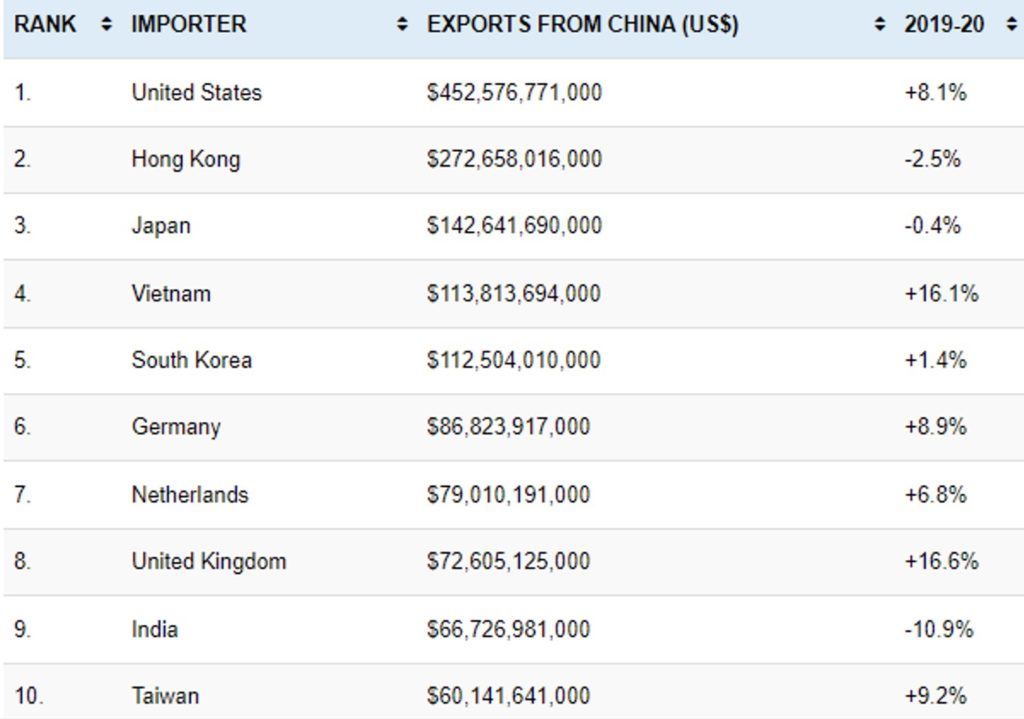 Chinese Foreign Policy Lines on Sovereignty of Other Nations

There are two main factors that shape China’s foreign policy related to the sovereignty issues of other nations. First, China prefers not to interfere in the domestic affairs of other countries to avoid the pernicious impacts of being party to intricate political disputes. Second, as China tries to control the Xinjiang and Tibet regions with methods contrary to human rights, it does not want to get embroiled in political disputes that could move its practices, especially in those two regions, to the epicentre of global discussions.

The US tries to prevent the flow of both financial resources and military equipment from China to Russia to protect the effectiveness of the sanctions. Biden warned Xi Jinping about the consequences and implications of China’s possible military and economic support to Russia, which would increase the resistance and stamina of Russia against the massive sanctions imposed by the West.

China needs time to emerge as a hegemonic power against the West by increasing its economic and political power in the long term. In this sense, Russia is seen as China’s most prominent strategic partner. It is not a sustainable position for China to develop close economic relations with the West while being ideologically sympathetic to Russia. Biden’s warning can be perceived as a strategic move to force China to clarify its position in international relations.

Both Russia and China have the same concerns over the “containment” policies of the US.  While Russia tries to expand its influence in the wider Mediterranean by being an active player in Syria, China concentrates on strengthening its anti-access – area denial (A2/AD) strategy to prevent the accession of the US naval forces to the West and the South China Sea in case of any military conflict in the region. It can be inferred from the security policies of Russia and China that they are trying to shape the international environment to end the superiority of the Western powers, and according to historian Al McCoy,  it is the right time for them to dominate Eurasia.

Joseph Borrell, chief of EU foreign affairs, stated that “We (Europeans) cannot be the mediators, that is clear, and it cannot be the US either. Who else? It has to be China, I trust in that”. China is the ideal country to be an effective mediator between Ukraine and Russia to end the war and reach an agreement. However, there are doubts about the true intention of China to act in a way to promote multilateralism in the international order and support the UN to solve the armed conflicts around the world. Due to its deep trade relationship and dependency on critical imported materials from Western countries, such as semiconductors, China’s “explicit” military and economic support to Russia should not be expected in the short and middle terms.

After the annexation of Crimea in 2014, the West could not react strongly enough not to spoil its relations with Russia. The EU increased its energy dependence on Russia due to commercial concerns. Tolerance towards authoritarian regimes causes them to be more daring with time-saving diplomatic moves, as seen in Russia’s invasion of Ukraine. In this regard, the level of Chinese support to a Russia at war will be defined by the Western attitude, which must be more rigid in this context.

(2) Research Fellow at Beyond the Horizon vzw, Project Manager of All-in-one 4 HER (ESF) and Supermentor (ESF)

(3) Research Fellow at Beyond the Horizon vzw, Project Manager of ORIENT8 (AMIF)