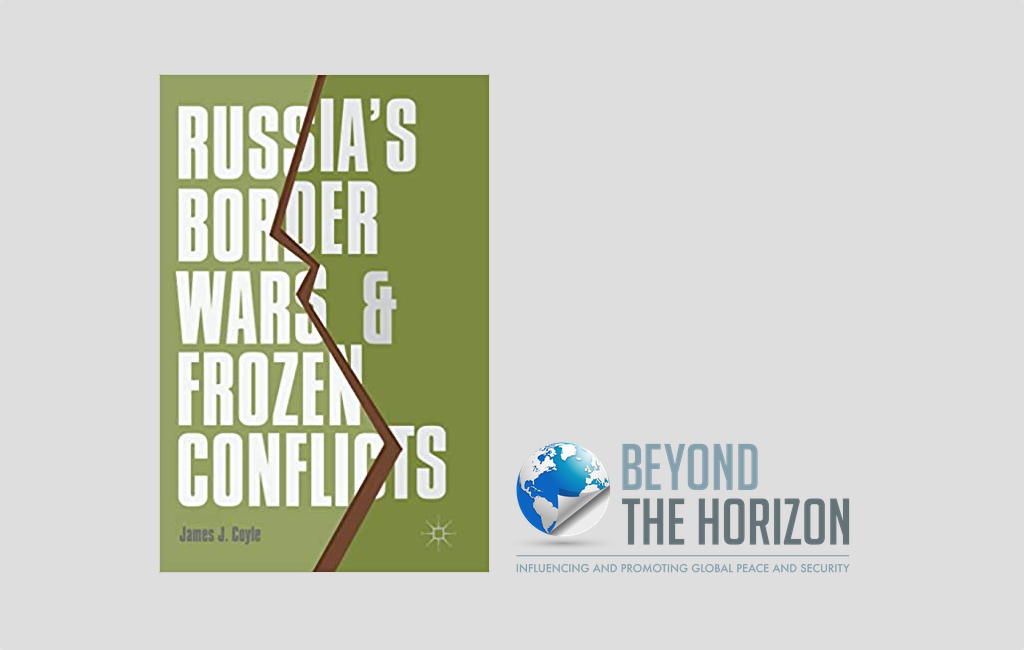 James J. Coyle’s book “Russia’s Border Wars and Frozen Conflicts”[1] focuses on four conflicts on the periphery of the former Soviet Union, namely Ukraine, Moldova, Georgia and Nagorno-Karabagh. Coyle examines origins and execution of Russian military and political activities within these conflicts in his book, and he aims to explain the commonalities and the differences among these conflicts. Additionally, he explores the remaining options for the resolution of these conflicts.

Looking into the concept of ‘Frozen Conflict’

Sticking to the recent mainstream writings of international relations, Coyle’s focus is more on the concept of ‘frozen conflict’ while defining the commonalities of these conflicts. Before reviewing the book, it would be useful to look into the concept itself, its definition, strengths and shortcomings in different contexts

This expression is widely used in the media, in international relations writing and in State practice for these separatist conflicts alongside the Russian borders.[2] While there is no legal definition of ‘frozen conflict’, it refers to a situation in which active armed conflict has been ended in a stalemate without a peace treaty or another political framework resolving the conflict to the satisfaction of the parties, thus, the conflict can start again at any time, creating an environment of insecurity and instability.[3] Coyle defines it similarly as “a conflict which remains between the stages of stalemate and de-escalation when peacekeeping efforts never result in the resolution of a conflict.” He argues that Russia has perfected the tactic of initiating frozen conflicts and keeping them ongoing to increase his regional power and stop other actors to gain power against her.

However, this expression is scarcely used by international organisations and legal organs of international law, since it brings a number of difficulties when a legal view of “frozen conflicts” is taken, such as multiplicity of problems or disputes, tendency to pre-judge the situation, problem of legal fragmentation[4].

On the other hand, there are several scholars and analysts criticizing the concept in political context for leading a misunderstanding of the actual situation in the international arena. Socor sees the term “frozen” as a Western mischaracterization of Russia’s protracted conflict undertakings.[5] He argues that those conflicts never “froze” in a political sense, and the cessation of hostilities has allowed steady movement toward political solutions favourable to Russia itself and its local protégés.

In his valuable study, Coyle places these four “frozen”, unterminated, separatist conflicts in the Post-Soviet Space in a wider political and legal context. Coyle’s main theoretical framework of conflict analysis contains the theories of international law, realism and (ethno-) nationalism.

He analyses the conflicts from the position of two-level actors, namely nation-states (systemic level) and the groups of people united by nationalisms (sub-systemic level). He sees the interaction of these actors at the different levels keeping the conflicts alive in a relatively “frozen” state. That is why he looks at these interactions, and especially tries to explain how Russia exploits and manipulates these actors’ positions and interactions in the frame of international law, realism and nationalism theories.

Coyle focuses on two schools of nationalism: French nationalism on the one side having an emphasis on the common will of the people, liberty and the rights of the individual and on the other side German nationalism based on the glorification of the nation-state’s power. Which brings a more viable state is still an open question, but both has weaknesses to be exploited when a homogenous minority group is present within the population. In those multi-ethnic states, a concept can bring legitimacy to a state’s rulers, but it could not be limited to the central government alone. Once the state is perceived to have been seized by a particular ethnic group, alternative nationalisms spring up among the other ethnicities.

Within the realist theory, he highlights Neorealism stating that the anarchic nature of the international system causes conflict; the states concentrate on how to increase its own power; and the search of power among the nation-states in the world brings a security dilemma.

He discusses the historical background of these conflicts referring to different and diverging Russian and Western perspectives. This gives him way to apply his framework to each frozen conflict case and to analyze them to find out the commonalities and differences among them in terms of three main theories.

The newly emerged nation-states after the collapse of the Soviet Union were formed based on Western nationalism, either one of the aforementioned nationalism schools. Armenia, mostly homogeneous, relied on German school to define itself. All other states part of the discussed conflicts had multi-ethnic political entities, subgroups with different ethnical, religious background or speaking different languages, and applied French school of nationalism. But in contrast, separatist movements within these countries have heavily relied on the German school of nationalism in the time, and they were easily exploited by Russia, which paved the way for conflicts in newly emerged states.

Coyle tries to define the illegal acts of the actors against international law. He focuses on the principle of no right to use force for secessionist movements. In addition, acquisition of territory by force is illegal, and respect for the sovereignty of member states is a requirement for all members of the United Nations. In this respect, Russian annexation of Crimea, an area that she previously recognized as part of Ukraine is illegal. Similarly, Armenian de facto occupation of Karabakh is also illegal. The world similarly didn’t accept an independent Abkhazia or South Ossetia as well. Moreover, Russian support for separatist movements in Transneister and the Donbas has no basis in international law.

Coyle reads Russian foreign policy towards its near abroad by (neo-)realist theoretical understanding. Gaining a point of entry by these domestic conflicts, Russia follows a realist approach and tries to increase its own power by making allies while weakening the power of her potential rivals at the same time. He argues that Russia intervenes in these conflicts to keep them alive for the protection of her national interests and intends to continue increasing its power regardless of international law.

Coyle’s another interesting explanation for the policies of case states’ is ‘balancing’, which means as a phenomenon that each side aims to gain additional power to face its rival by allying with external actors. This explains why new states aligned themselves with a strong ally in order to prevent hostile action by a potential threat. The alignments were with the Western world in the cases of Moldova, Ukraine, Georgia. On the other hand, Armenia sided with Russia, while Azerbaijan tried to find a balance in between.

Analyzing all four conflicts, Coyle concludes with a pattern of Russian foreign policy towards her near abroad Post-Soviet countries which is explained by (neo-)realism. In short, this pattern can be summarized in four steps:

Central governments of these post-Soviet states had a tendency to reflect the interests of majority population rather than those of the minorities. As a consequence, interethnic conflicts arose, usually over the sharing of resources. The Kremlin encouraged minority groups to separate themselves from the majority population.

Once the Kremlin managed to feed secessionist tendencies, it provided military support in various formats to the rebels. In all cases, Russia claimed a special status, and the right to intervene to protect the peace or the rights of Russian minorities in the country.

It then used its overwhelming regional presence to claim a place in negotiations, diplomatically authoring most of the peace accords, where Moscow used its position actually to prevent any peace from realization.

Not to risk more than limited open military intervention, the Russians executed a new form of warfare, which is called ‘hybrid war’ by the West. It can be explained as the use of military and non-military forces in regular and irregular ways, staying below the threshold of a war by doing mostly unattributable acts, using proxies and denying actions. It used the presence of its peacekeepers and its diplomatic skill to keep these conflicts in a “no war, no peace” situation that maintains a Russian role in its borderlands. As the frozen conflicts have dragged on, pro-Moscow forces slowly assumed control of the governments on both sides.

By following such a pattern, Russia is mostly the only winner on its border wars and frozen conflicts, increasing and consolidating its regional power. It has already gradually rebuilt its security buffer against NATO and the Western World, which she saw as an expanding threat approaching her backyard from a realist perspective. Politically, all the separatist movements are allied with Moscow. At the same time, pro-Kremlin officials lead the governments of Moldova, Georgia and Armenia. Economically, Russia convinced Armenia and Moldova to give up their association with the EU. All these efforts make Russia to benefit from such a regional realignment. It is seen that Russian power and influence has grown in the region, while violating international law.

How should the West react against Russia?

While Russia is winning, the losers of the Russian violation of International Law are mainly the people of these countries who have to live in the harsh conditions of the conflicts. In such situations, it becomes necessary for world leaders to mediate diplomatic negotiations to halt the conflicts. When there is a negotiation in good faith, there is higher chance for a resolution. When the international mediators use the peace process to further their own ends at the expense of the belligerent parties, the result is always continuation of conflict. Russia’s involvement in these peace processes keeps the conflicts frozen. If negotiations don’t work, there is other international tools for conflict resolution, such as military intervention or peace enforcement. But as a member of the UN Security Council, Russia have a right to easily block this kind of efforts.

The West has to find some way to increase the cost for Russia, until it is no longer in the Russian interest to encourage frozen conflicts. Russia should be prevented from continuing to destabilize its borderlands for protecting its interests. Then how should the West react, which foreign policies should they apply? Author gives four policy recommendations for the USA and NATO:

The book provides a good understanding of the frozen conflicts in post-Soviet countries and defines the Russian foreign policy pattern well. In this sense, policy recommendations can be discussed and elaborated into more concrete actions.